The dog suddenly began to rush at people on the street, growl at the household, and its behavior simply changed. Why? Where did aggression come from and how can you fight it?

It is believed that the domestic term “aggression” originated from the Latin word aggredi, which means to attack, and from the French aggressif, which characterizes the subject as an attacker and belligerent.

Contents hide
1 What Kind of Aggression Is There?
2 Why is the Dog Showing Aggression?
3 Why Does the Dog Become Aggressive?

What Kind of Aggression Is There? 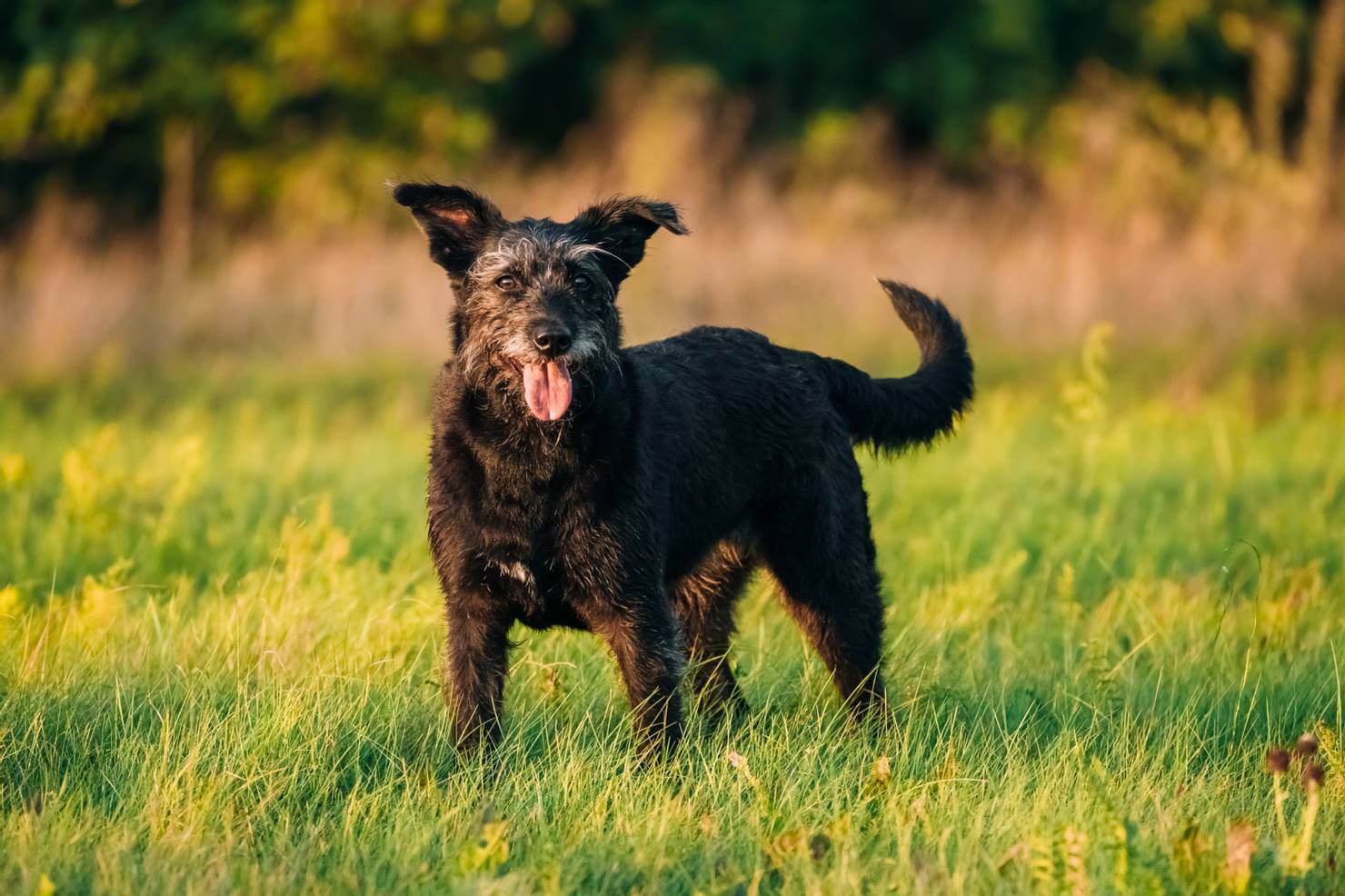 Demonstrative aggression is called non-contact aggression – a kind of intimidating and warning behavior. In fact, if you scare your opponent, he can chicken out and retreat, then you won’t have to fight.

A self-confident dog usually shows demonstrative aggression in the following way: the tail is tense (it is raised, the hair on it is tousled), but it can shake or wiggle; the scruff of the neck (sometimes the sacrum) has bristled; the ears are raised and directed forward, vertical folds may appear on the forehead, the nose is wrinkled, the mouth is slightly open and bared so that the teeth and gums are visible, the paws are straightened and tense, the look is straight and cold.

The demonstrative aggression of an insecure dog is not so much frightening as warning behavior: if the dog is standing, then it crouches a little, its legs are bent, the tail is drawn in, but it can wiggle; the scruff of the neck has bristled, the ears are laid back, the pupils are dilated; the mouth is bared, but not wide open so that the teeth can be visible, the corner of the mouth is directed back and down.

With demonstrative aggression, dogs often growl or growl with flaking, and can also lunge towards the opponent and immediately step back.

If the task cannot be solved with the help of demonstrative aggression, the dogs move from “words to deeds,” that is, to physical aggression.

Often, physical aggression begins with a push with the shoulder, an attempt to put the front paws on the opponent’s withers or put his muzzle on him. If the opponent does not take the posture of submission and does not stop resisting, use a mouth armed with teeth.

However, dogs are well aware that teeth are “cold stabbing weapons” and use them following some rules. To begin with, they can simply strike with their teeth, and then – incrementally – grab, squeeze and release, bite, seriously bite, bite and jerk, grab and swing from side to side.

Why is the Dog Showing Aggression?

And what is this seemingly indecent behavior in a decent society for? I will reveal a terrible secret: each of us is alive only because each of our ancestors could be aggressive when needed. The fact is that aggression is a way of satisfying any need that is currently of increased importance for an animal in the presence of an obstacle – usually in the form of a rival, competitor, or enemy.

Imagine yourself as a dog and imagine that you are walking, all so thoroughbred and beautiful, but nevertheless hungry as a wolf, along the path. And suddenly you see: there is a beef gruel of extraordinary appetizing and attractiveness, and this gruel can save you from starvation. And you are heading at a dancing trot to this moslu in order to carry out peaceful food-gathering and not interfering with anyone. But then something dirty and in tangles falls out of the bushes and makes its claims to the possession of practically your broom. And you perfectly understand that if you give up the bone and meat, you will die and your grandchildren will not walk on the earth.

But it is dangerous to immediately jump into a fight, especially since it looks like “something in the mats” is large and ferocious. In a fight, you can get injured, and sometimes serious and not always compatible with life. Therefore, for a start, you turn on the mechanism of demonstrative aggression in the struggle for your mosol. If your opponent gets scared and retreats, then this will all end: you will remain whole, unharmed, and well-fed, and generally remain on the ground. And if the opponent is not one of the fearful ten and begins to threaten himself, then you will have to either yield or turn on the mechanism of physical aggression.

Suppose when you rushed at the one with the tangles and bit him in the paw, he turned around and ran away. You are a winner! Now you will not starve to death and your brave genes will be proudly worn by your grandchildren! This is an example of food aggression.

Most of the aggressive behavior is more like a tournament fight with blunt spears. This is ritualized or imaginary aggression. Its goal is not to kill the opponent, the goal is to suppress his claims and get him out of the way.

But there are two types of aggressive behavior, in which the goal is just to inflict damage, as they say, “incompatible with life.” This is hunting aggression, it is also called true or predatory aggression, which is noted when killing an animal that is food. And also in a critical situation of defensive behavior, when you are about to be killed, mistaken, for example, for that very food animal.

Why Does the Dog Become Aggressive?

Aggressive behavior is, of course, genetically determined. That is the more genes that are irresponsible for aggression, the more aggressive the animal is. And this is actually the case. As you know, there are dog breeds, among which the number of aggressively behaving individuals is greater than among individuals of other breeds. Such breeds were specially bred for this. However, there may be animals with increased aggressiveness and not specially bred, but as a result of some closely related breeding. And, of course, there are all kinds of them. The propensity for aggression and its severity are extremely individual, and among dogs of any breed, antisocial muzzles can be found.

However, the likelihood of manifestation of aggressive behavior is determined by the upbringing and conditions of the interaction of family members with the dog. Of great importance is the threshold of aggressive behavior, that is, the time, the totality of information, signals, irritants, and stimuli that tell the dog that the time has come to turn on the mechanism of physical aggression. And it is quite objective, and therefore the world is not as aggressive as it could theoretically be.

On the other hand, this threshold also depends on the subjective significance (importance) for the animal of the need that is being prevented from being satisfied. And that’s why there are dogs that “get turned on” where other dogs behave calmly or are limited to demonstrative aggression. For example, some dogs may overestimate the danger in front of them and quickly turn on defensive aggression, or overestimate the likelihood of starvation and immediately begin to defend the bowl of food from the owner who just put it in.

Conditioned aggression is also distinguished, formed by the mechanism of the classical conditioned reflex. Previously, such aggression was launched by the “Bite!” At home, it is often formed according to this scenario. The owner catches the puppy for unseemly behavior and after the phrase “Now I will punish!” slaps him painfully. A year later, having gained strength, the young dog, in response to this phrase, no longer responds with signals of obedience and reconciliation, but with demonstrative aggressive behavior, or even attacks the owner.

In general, if you often spank your dog, he begins to think that this is a normal form of communication in your family, and begins to spank you. And she can only spank with her fangs. Consider this.

And further. The dog is more likely to show aggression towards a person whom he does not consider has the right to control his behavior, limit it or correct it. Previously, in order to exclude the aggressive behavior of the dog towards himself, the owner was recommended to become a “dominant” subject in relation to the dog. It is now recommended to become a “respected” dog family member or “loyal partner.”

Often, a dog begins to behave aggressively when it is forced to do something that it does not want to do at the moment, or when it is prevented from doing something that it really wants to do. When they hurt her, when they take away what is important to her, or she decides that they can encroach on it, and begins to guard it. But, probably, all the cases cannot be enumerated, because it was not for nothing that the great Tolstoy used to say that all unhappy families are unhappy in their own way.