Obedience is a fine art in dog sport. It has to be learned step by step. Only a few special accessories are required. But what is helpful is keeping an obedience training diary to keep track of progress. 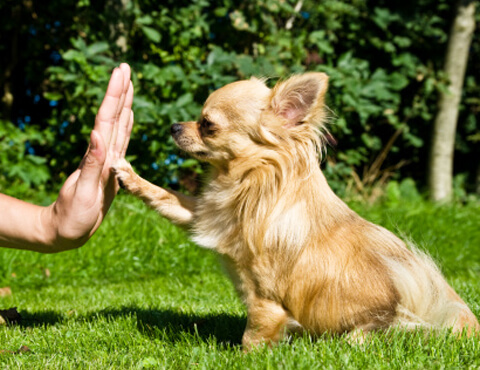 The dog sport Obedience is derived from the English word for obedience. Obedience is about the perfect understanding between dog and human. Many compare the training with dressage riding, agility with show jumping. Obedience training is a kind of special freestyle.

Obedience training, like agility, comes from England. Obedience was invented as part of the versatility tests. That was almost a century ago. It has only been a recognized dog sport since 1951.

How Does Obedience Training Work?

The perfect communication is the alpha and omega that must prevail between humans and dogs. Correct upbringing and consistency are important here. Dogs have to trust their humans 100 percent. He has to do some exercises that are very far away from the holder and sometimes out of sight.

Rally Obedience for Dogs and humans

The social compatibility of the dog with other animals and people is a test point. Even if the term “obedience” suggested it, obedience training is not about the drill. The dog shouldn’t just obey. Rather, he should voluntarily follow his human being and hear what his human being is saying. This is achieved when the four-legged friend trains with fun and recognizes the advantages that he has when he adapts to his human being.

Which Breeds of Dogs for Obedience?

In general, all dogs can take part in obedience. It makes no difference how big or small, what race they belong to, or how old they are. So you can assess for yourself whether your dog is best – but of course, it should also be fun for the dog. The judges are instructed to take into account the special features of the participants in the assessment.

Obedience: It All Depends on the Class

There are four different obedience classes:

There are ten exercises per performance class. These must be executed one after the other without errors. This includes:

In obedience, the main focus is not on physical performance or speed. The bond between dog and owner should be strengthened. That is why obedience training is ideal for all dogs.

In the Exam: Obedience Exercises

In obedience, there are no fixed procedures for the examination. Therefore, the owner and his dog are brought to the field by a ring steward and guided through the test before the exercises are assessed. Since the owner only learns during the exam which exercises he has to complete, everyone should practice all of the tasks as far as possible.

Individual exercises always start and end in the basic position. The dog sits close to the dog owner’s left side and keeps eye contact with him. The dog and handler are aligned exactly parallel in the body axis, the shoulder of the dog is at the height of the knee of the person. Exactly aligned means that the dog is sitting “straight” forward. Then the execution of the exercises begins:

Behavior Towards Other Dogs

The first test is behavior towards other dogs. All dog-human teams line up in a row. The first team then passes by a meter in front of and behind the other teams. The dogs should be indifferent or friendly. Aggressive behavior should never be shown. If a dog shows negative behavior, the team will be excluded from the test.

The next part is standing and touching. The dog handler steps out of the group if the ring steward asks him to do so. The owner can decide whether he wants to work with or without a leash. Man and dog go into the basic position. The dog must stand as instructed by the ring steward. The owner goes diagonally next to the dog. If the line stays on, it must hang loosely. The owner may calm the dog down, but commands may not be given. The ring steward touches the dog at all points, whereby the dog must standstill. Then the owner goes back to the dog in the basic position. The dog’s behavior is the focus of the assessment. If the owner gives help, points are deducted.

Drop in the Group

The next step is dropping in the group. All participants stand in a row about three meters apart. The dogs are then leashed and placed one after the other in the “place”. The keepers walk about 20 meters away from the dogs and turn to face them. The dog is not allowed to change its position for the next two minutes. He is only allowed to crawl forward his own body length. At the instruction of the ring steward, the owners go to their dogs, who still stay in place. The steward gives the instructions for the dogs to get up one after the other to return to the basic position. The owner must give his dog the commands without disturbing the other dogs. The dogs must learn to react only to their own handler.

Then comes the free heeling, where the guidance starts with the foot. Walking means that the dog is walking to the left of the person, the shoulder of the dog is at knee height and the dog maintains eye contact with its handler. The dog should not hinder people while walking. The ring steward gives a predetermined sequence of instructions. The commands are forward, turn right, turn right, turn left, turn left and stop. The turns must be made at a 90-degree angle. The “stop” should occur suddenly, without a command.

Sit Out of Motion

Sitting while in motion is performed with a dog that is not on a leash. The start is in the basic position, after about ten meters the dog is given the command “sit”. The holder does not stop walking and does not turn around. The owner has to stop for another ten meters and turn to the dog. According to the steward’s instructions, the person goes back to his dog on the right side and puts the leash back on.

Send Ahead in a Square

The forwarding goes in a square ten meters away and three by three meters in size. The corners form pylons, a tape or a marking on the floor serves as a demarcation. The dog is placed in the square. The owner goes to the dog and assumes the basic position with him. The handler then walks about 20 to 25 meters to a given point. He turns to the dog and calls him. The dog must get to the owner quickly and in a straight line and sit in front of or next to him.

When retrieving on level ground, the dog handler moves five meters away from the dog and places an object on this route. He is allowed to retrieve the object on command. The object should be grasped, but not repeatedly touched or chewed. There are two options for outputting. The dog sits with the object in front of the handler and continues to hold it. He only lets go of the object on command and returns to the basic position after the next command. The dog immediately goes into the basic position and continues to hold the object. He issues this on command. The dog must not simply drop the object. There should also be no additional commands.

Control at a Distance

Good Obedience Training is the Basis

The basic requirement to be successful in obedience is good training. Obedience is not a special form of training, even if it is often portrayed as such.

Only the result, i.e. at which examination level the exercises are completed, is prescribed. It is up to you how to achieve this. Positive reinforcement is a good tool here. The typical sound of the barracks yard, which often used to be heard in dog squares, is, fortunately, a thing of the past in almost all squares.

Obedience is all about having fun. In order to achieve really good results, everyone should find out the best training method for themselves. Every dog owner knows best how to learn something from his dog. And if something doesn’t work right away, just don’t give up and start all over again. As they say? “Practice makes perfect.” And that’s exactly how it is.