Some fans, in their reviews of the English Bulldog breed, lovingly call these dogs “charming freaks” – after all, their not very attractive and comical appearance is more than compensated for by a gentle and selflessly loving heart. This stocky, robust fellow with an imposing appearance is not at all the bloodthirsty and aggressive creature that we are used to seeing his relative – the fearless and distrustful American Bulldog. This breed has lost all its fighting qualities for a long time – since it ceased to be used for its intended purpose. But once this dog was a favorite of the public in bull-baiting competitions! Despite his small stature and compact size, he was considered an excellent fighter: after all, in addition to the famous bulldog grip, he possessed extraordinary resourcefulness and the ability to do what other dogs could not do: bite the bull for his sore spot – the nose. Since 1835, bull-baiting was banned, and the English Bulldogs from aggressive fighting dogs gradually began to turn into aristocratic gentlemen and used as property guards and companions. The most aggressive individuals (and there were plenty of them) were taken out of England, and the remaining dogs began to be instilled with a new temperament, trying to change their firm disposition to “soft and fluffy.” 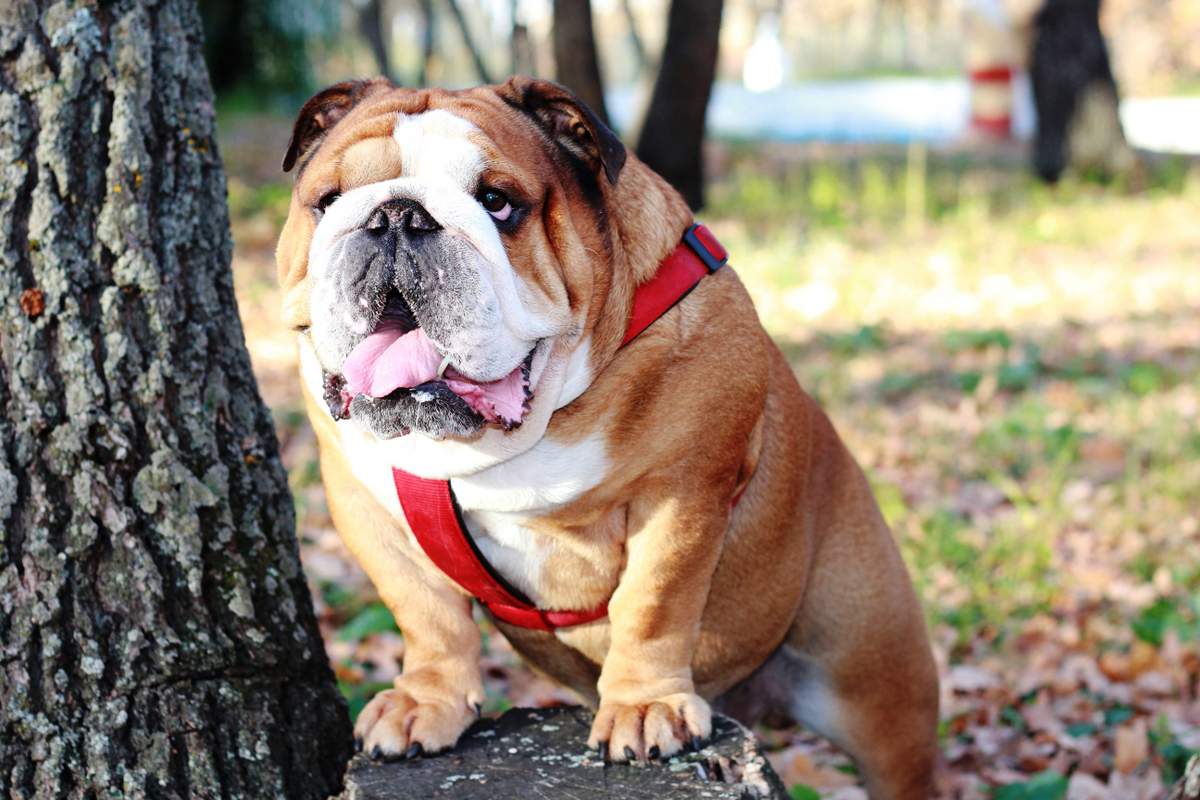 As a result of long-term selection, these rude fighters turned into good-natured charms, which they remain to this day. The English Bulldog is a stocky and “moderately well-fed” dog. He has a large head, a wide upturned muzzle with many folds, short massive limbs, broad shoulders, small erect ears, and a short tail (up to 8 cm). The modern English Bulldog is a family dog, a favorite of children and adults. He loves to play with kids – after all, he himself is a cute, awkward, and funny child. This intelligent lover of comfort will perfectly fit into the style of a city apartment and will become its worthy decoration. These dogs are very loyal creatures, and if any of the household members have trouble, he will certainly sympathize and support them. The English Bulldog stands up for its owner with a mountain and can hardly endure a long separation from him. He has a very strong psyche and calm disposition, but if you offend him, he can remember the fighting disposition of his ancestors and respond to the offender. If your pet meets his brother on the street and wants to communicate with him, he will not bark or bully, but as a true gentleman he will approach and “take off his hat”, even if this dog is several times larger than himself. Perhaps the only drawback of this bulldog is the ability to emit snoring that is not very pleasant to the human ear, but how can this trifle affect your decision to get this wonderful and touching creature!

When buying an English Bulldog puppy, you need to clearly understand for what purpose you are purchasing it – the choice of the sex of the animal largely depends on this. Males are more curious, stubborn, and cocky. They have a less developed self-preservation instinct. It will take more effort to train a dog. But nevertheless, it is the males that are the most prominent representatives of the breed. They are larger, more powerful, and showy bitches. If you are planning to exhibit your English Bulldog at competitions and shows, opt for a male dog. The physiological characteristics of the “female” organism suggest some difficulties in the dog’s show career. The bitch falls just in time for the show season, during pregnancy and after childbirth the bitch is also out of shape. Choose a puppy very carefully and do not be guided by emotions in choosing: the standards for show dogs of this breed are very strict. When heading to the nursery or to the breeder, take with you a specialist cynologist who will help you make the right choice. If you want to engage in breeding English Bulldog or just make a good friend and “family man”, it is better to take a girl. They are more affectionate, more judicious. English Bulldog bitches are better trained and more attached to the owner. The inconvenience of keeping a girl occurs during estrus. But the problem of stained carpets and armchairs can be solved with diapers or panties.

Unfortunately, English Bulldogs are not very healthy. They may have heart and lung problems, as well as skin conditions and allergies. When playing with an animal, do not turn it over on its back, take it carefully in your arms – English Bulldogs are prone to volvulus. Eye diseases are also characteristic of this breed: volvulus of the eyelids, adenoma of the third century. If you do not consult a specialist in time, there can be serious complications, up to blindness. These creatures prefer walks calm and unhurried. Be careful in hot and sweltering weather – English Bulldogs can easily get heatstroke, also, for this reason, do not leave the dog in a closed car. In hot weather, try not to walk with your pet, do not let him run, do not take the bulldog to the beach. Do not experiment with the diet of the English Bulldog as it may cause an allergic reaction. Sausage, smoked, sweet, fatty foods, baked goods, canned food, harmful to all dogs, are deadly for a bulldog. Caring for the coat of an English Bulldog requires a minimum of effort. Brush your pet’s coat once a week. You can bathe the bulldog once a month or less. Use only special dog shampoo. By the way, there is a special bleaching shampoo for dogs with white hair. The temperature of the bathing water should be about 35 C. After water procedures, dry the pet thoroughly and leave it in a warm room away from drafts until the coat is completely dry. The skin between the toes sometimes melts, irritation appears. This problem can be solved with talcum powder from a pet store or ordinary baby powder. In winter, to avoid inflammation and cracking of the paw pads from the salt sprinkled on the streets, drive the dog in the snow, wear special boots, or lubricate the paws with petroleum jelly or sunflower oil. Trim your pet’s nails regularly. 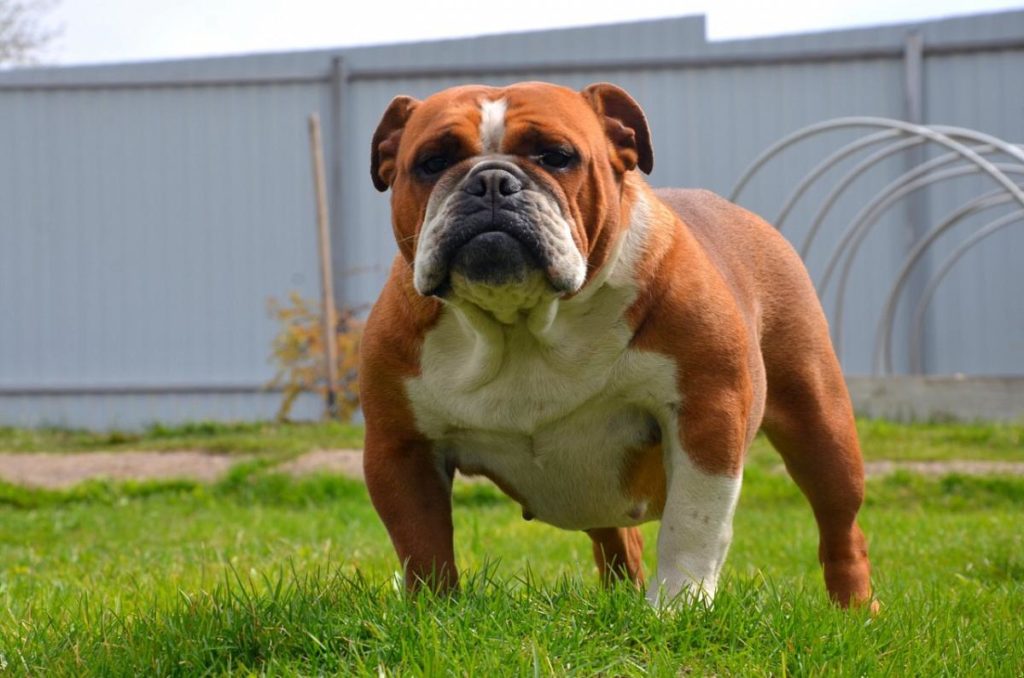 The high price of puppies is largely due to the difficult breeding process of English Bulldogs. The first difficulties arise already with knitting. The process is quite complicated, even experienced breeders help mating animals with six hands. In addition, it is also necessary to “guess” whether the bitch is ready – ovulation can occur on any day of estrus. Western experts have learned to determine the term with the help of a smear, in Russia, they still knit almost at random. According to statistics, only 10% of English Bulldog bitches can independently give birth to puppies. In 9 out of 10 cases, you have to have a cesarean section. This is due to the peculiarities of the physiological structure: the curved lower back of the mother does not allow the puppies to take the correct position in the birth canal, and the large head of the puppies does not pass through the narrow pelvis. Carrying out a “cesarean” is also fraught with difficulties. Given the breed’s heart problems, anesthesia must be used with caution. Much depends on the professionalism of the veterinarian, so you should not hire a doctor from the street. The dog should be operated on by an experienced specialist with good recommendations.

This snub-nosed dog is famous for its intelligence – it is able to memorize more than 300 “human” words. But despite this, the English Bulldog is a little clumsy and slow, so he slowly comprehends the basics of dog education. When training your pet, get patience: he will not immediately master all the tricks, but sooner or later he will succeed – he is incredibly stubborn. By the way, in moments of danger, not a trace of his slowness remains and he acts quickly and decisively.