Two different colored eyes are real eye-catchers for dogs and cats. This impressive appearance is called odd-eyed. It occurs in humans and animals and is usually of very different origins. You can find out what is behind the odd-eyed phenomenon in dogs’ eyes in the following article.

Contents hide
1 The Essentials in Brief
2 Odd-eyed Phenomenon: What Is It?
2.1 Which breeds of dogs have two different colored eyes?
2.2 Which eye is the normal color?
2.3 Which combinations are possible?
3 Our Recommendation: Check the Origin of the Odd-eyed Phenomenon 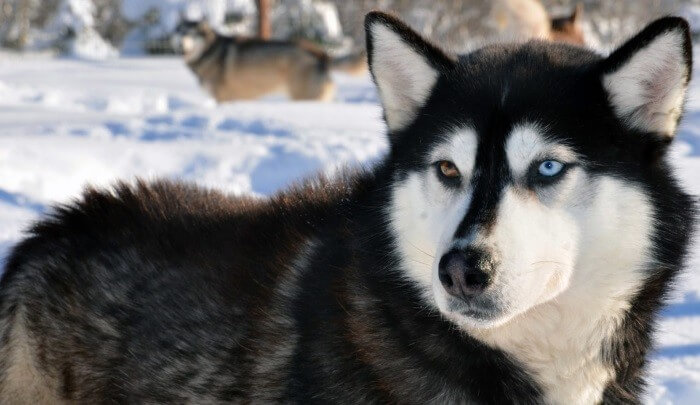 Odd-eyed Phenomenon: What Is It?

The look from these two-tone eyes is almost mesmerizing and extremely fascinating. Colloquially, it is referred to as the odd-eyed phenomenon when an animal has two different colored eyes. The scientific term is “iris heterochromia”. If you ask yourself the question “What is Heterochromia irdis?”, Let me tell you: It is a discoloration of the iris of the eyes. The iris is also called the iris. This is the colored part of the eye, which takes on different tones in the odd-eyed phenomenon. The reasons for this can be genetic, but diseases are also possible triggers.

As a rule, the pigmentation of the iris is disturbed, which is why the eye color is different.

Which breeds of dogs have two different colored eyes?

Which eye is the normal color?

As a rule, the animals always have one blue eye and one of a different color. The latter shows the “normal” eye color of the four-legged friend. The black eye often lacks normal pigmentation due to mutation, heredity, or disease. However, if the visual change in eye color only occurs over time, you should consult a veterinarian.

Which combinations are possible?

As already mentioned, most often there is a combination with blue. Both green, yellow, and brown are within the realm of the possible as a counterpart to the blue eye.

Our Recommendation: Check the Origin of the Odd-eyed Phenomenon

If you want to buy a dog with two different eye colors, you should check with the vet that the animal is healthy. In the worst case, the four-legged friend has a congenital disease or is about to go blind. The meaning of two-tone eyes isn’t necessarily a bad thing, however. If the animal has two different eye colors from birth, it may be a congenital trait such as a genetic defect.