Dogs have their own way of communicating. In addition to body language, such as tail wagging and the alignment of the ears, dogs also communicate through sounds such as barking, yowling, or growling. Many dog owners are frightened when the dog growls at them. However, growling can be for a variety of reasons. Here you can read what is behind it and how to behave properly when your dog growls.

Contents hide
1 Growling Dog in Brief
2 Why is My Dog Growling at Me All of a Sudden
3 What are the Triggers for the Growl?
3.1 Threat: Dog growls at visitors or children
3.2 Growling at frustration or distress
3.3 Growling at fear and fright
3.4 Growling when in pain
4 Our Recommendation: Show Sensitivity 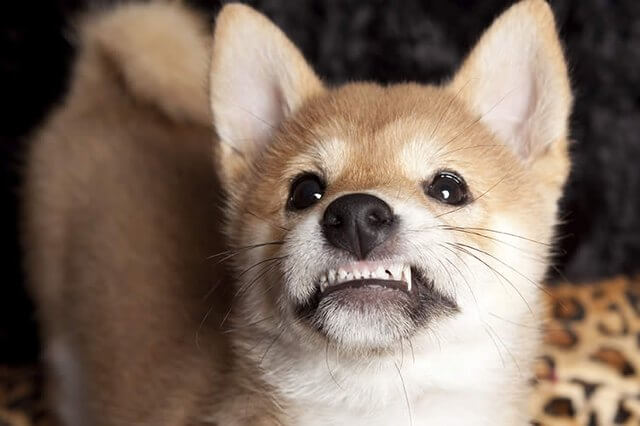 Why is My Dog Growling at Me All of a Sudden

Growling is an important part of dog communication and social behavior. By growling, the four-legged friend shows that he feels uncomfortable, distressed, or threatened. Even with fear, pain, or frustration, the dog growls at its owner. Contrary to what many people think, growling is not necessarily an expression of aggressiveness.

Just because the dog growls doesn’t mean he’s about to attack.

The growl is a warning: the dog is dissatisfied with the situation and expects to be appeased.

What are the Triggers for the Growl?

To find out why your dog is growling at you, you need to closely monitor his behavior. The better you know your furry friend, the better you can interpret its behavior. Pay attention to the situation in which your dog growls and whether it is sending important body signals beforehand, for example, the drawing in of the tail, big ears, barking, or the like.

Over time, you will see the most common reasons your dog growls. These include:

If the dog growls at strangers, visitors, or children, it probably feels threatened or threatened. Especially in their own home, i.e. in their territory, visitors often scare the dog. He wants to defend his territory and shows by growling that the strangers should keep their distance.

If the dog growls at its owner, this may also be due to a feeling of threat, for example, if it lacks quiet places to retreat when it wants to sleep. Or he sees himself so threatened by a fellow soldier that he becomes jealous.

Growling at frustration or distress

A common situation in which the fur nose growls at its owner is playing or eating. For example, if your dog chews with relish on a bone or plays with a toy, it can become frustrating if it is taken away from it or if it is approached. The dog defends his food or toy and growls at the troublemaker.

Growling at fear and fright

Anxiety is a common trigger for dog growling. Whether fear of other dogs, of people, cars, bicycles, and the New Year’s Eve fireworks: every dog has different situations, objects, or noises. If the dog is terrified of something, it often creates fear.

As an avoidance strategy, the dog will start growling as soon as you expose it to the situation. If the dog is particularly frightened or very frightened, it can growl at you.

Growling when in pain

If your dog growls at you, pain can also be a trigger. For example, if the animal has injured its paw while walking, your dog may growl at you as soon as you try to approach it or investigate the injury.

Correct handling of a growling dog is important to avoid escalation and improve communication between dog and human: