It would be really exciting to be able to see through the eyes of a dog. Knowing whether they can see in color, in focus, or just outlines, need no longer remain a mystery. Dogs keep looking at the television screen. Humans can then only puzzle whether the dog sees the same thing as humans themselves.

Contents hide
1 How Dogs See: More Sensitivity to Light
2 How Dog Sees the World: With Moving Pictures
3 How Does a Dog See the World: Larger Field of View
4 How Do Dogs See Us: The Visual Acuity
5 How Do Dogs View Humans: Color or Black and White?
6 How Dogs See Humans: Dogs Recognize Faces
7 How Far Can Dogs See: Dogs See in Their Own Way?

Dogs’ eyes are much more sensitive to light than humans. Dogs can actually see equally well during the day and at night, as the vet confirms. Everyone who drives a car at night knows the shining eyes of an animal. A light reflex is responsible for this. It comes from a specific layer of the retina. The Latin name is Tapetum lucidum. It acts as a reflector and ensures significantly better vision in the dark. It is well developed in dogs and cats. Humans do not have a tapetum in the retina. The tapetum even enables double use of the incident light in the dark. The downside is that you lose visual acuity.

How Dog Sees the World: With Moving Pictures 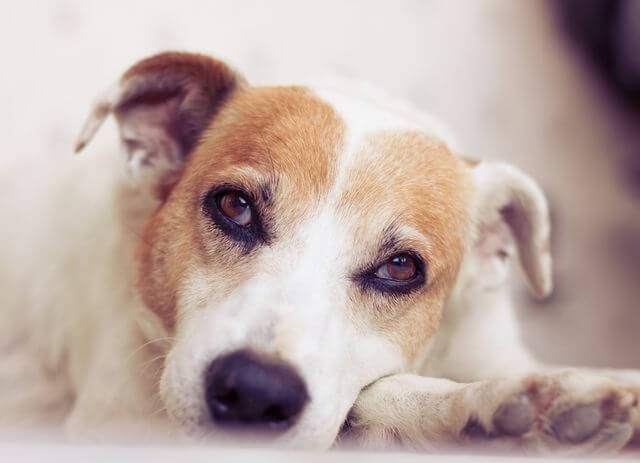 Dogs are particularly good at seeing things in motion. The human eye sees clearly better in the bright when moving. This is due to the cone-rich fovea, an area of the retina of the sharpest vision. In the twilight, however, dogs have the advantage with their very large peripheral field of vision. You are very sensitive to movement. They can perceive moving objects much faster. The construction of dog eyes is designed so that they can detect moving objects at a great distance. While standing objects tend to be ignored, movement is generally perceived. If something moves in the field of vision, it is noticed. The reflex to pursue it may then follow.

How Does a Dog See the World: Larger Field of View

The average dog has a field of view of 250 °. For cats, it is 200 ° and for humans 180 °. This means that a dog’s field of vision is very large. It enables him to search the horizon for moving objects. It is assumed that dogs are therefore much more sensitive to movement in their environment than humans. A dog can see an area of 150 degrees with only one eye. The binocular overlap, i.e. the field of view of both eyes, is, however, significantly less in dogs with only 30 – 60 ° than in humans.

How Do Dogs See Us: The Visual Acuity

Dogs cannot see precisely, but only a distorted image of the environment. This is due to astigmatism. There is seldom an ametropia of more than one diopter. The eyesight is hardly affected by it. The refractive power of a dog’s lens is 41.5 diopters. A human is 19 diopters and a cat is more than 50 diopters. The focus of the lens is poorly developed in dogs with only 2-4 diopters. Dogs can therefore not see clearly objects that are closer than 30-50 cm.

How Do Dogs View Humans: Color or Black and White?

Color vision differs significantly between dogs and humans. You cannot differentiate between long and medium wavelength colors. Through this ability, humans see yellow-green, yellow, orange, and red. Guide dogs for the blind cannot see the colors of a traffic light. They are probably using other parameters for correct interpretation. They use the position or different brightness of the signals. When it comes to differentiating between shades of gray, dogs succeed much better than humans.

As researchers have found out through various experiments, dogs can recognize human faces. And even in pictures. In an experiment, the dogs were presented with photos of different people. They focused much more intensely on photos with people who were familiar with them than on photos with strangers.

How Far Can Dogs See: Dogs See in Their Own Way?

If the vision of humans and dogs is compared, it can be summarized that the eyesight of the dog “with regard to depth of field, color vision, accommodation, and visual acuity is significantly reduced. Qualities such as seeing in poor light conditions, perceiving movement, expanding the field of vision, and differentiating between shades of gray are much better, ”as the vet explains.