Giving advice on how to stop a dog fight is not at all difficult, but in order to follow them, it takes courage, some physical strength, good reflexes, and decent dexterity.

In the absence of this or that quality, intervening in a fight with dogs of medium and above-average size can lead to serious injury. So, if you are in doubt about your ability, shout as loud as possible and on a high note. A strong, prolonged cry can cause an indicative dominant in dogs, and dogs will stop fighting to determine the source of the cry and find out its possible consequences for themselves. By the way, if the dogs stop fighting, quickly run back, recalling your dog. 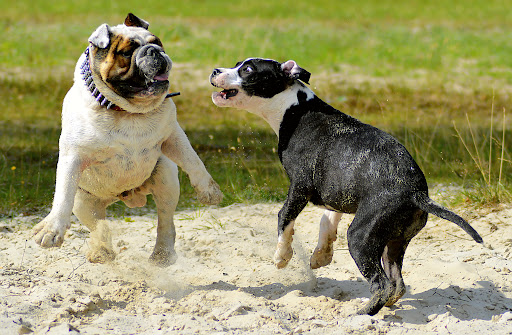 A loud shout can also attract the attention of passers-by, and among them there is sure to be someone who will be able, observing safety precautions, to stop the fight. You can not just shout loudly, you can shout loudly: “No!”, “Don’t!”. Sometimes it helps.

If you have a bag or a briefcase, a wide board, a piece of plywood, slate, or just a large stick at hand, shove them into the thick of things – into a fight. Do not hit anyone with these objects, namely, stick them into the fight. If the fight stops, quickly move your dog away;

Take off your jacket or raincoat, throw it over the dogs. Blackout will cause orientation behavior and the fight may end;

If you are one of those who go for a walk with a dog with a bucket of cold water in your bosom, suddenly, feel free to pour it on the animals. The fight will probably stop.

Dog fights can be divided into moving and motionless. Stationary fights are when two dogs grab each other and freeze. Separating such fights is a pleasure. If the dogs are not large, but, frankly, small, you and your opponent (the owner of another dog) gently take the dogs by the collars, scruffs, or hind legs and lift them off the ground.

Loss of support usually causes dogs to loosen their grip.

If dogs do not open their mouths, shake them a little, turn them over, press on the groin fold, pinch the groin, or squeeze the testes, if present. If this does not help, you will have to look for a stick and use it to open your jaws. After that, lifting the cylinders, you and your opponent quickly disperse in different directions. If your opponent slows down and is in no hurry to help you, do the same with your two hands.

If large dogs grab hold and freeze and the opponent does not slow down, synchronously behave as described for the case with small dogs. If your opponent slows down or does not have one at all, make a noose from the leash around the groin of the stranger’s dog and drag the dogs to the nearest place where the leash can be tied. Bind. Determine which dog is dominant in the grip and force it to open its jaws using one of the methods described above.

You can, of course, grab a stranger’s dog by the collar and, controlling it, force your dog to open its jaws and move aside with commands. But this is dangerous because a stranger’s dog may already start fighting with you.

If a dog fight belongs to the category of mobile, that is, two dogs, merging in an unfriendly embrace, move unpredictably along horizontal and vertical surfaces, you should not try to catch them by the collars and scruffs. You run the risk of being left without fingers, or even without the hands themselves. If there is an adequate opponent, simultaneously catch the dogs by their hind legs and lift them up, forcing them to open their jaws. Then move the dogs away from each other.

If the opponent is present but slows down, then, after catching his dog by the hind legs and dragging the dogs to him, offer him to take his dog, and then take care of your own. If your opponent slows down or is absent on the horizon, catch the stranger’s dog by its hind legs. Lift it up and with loud cries make your dog let go of the enemy, move away or just sit down. Pull the stranger’s dog away.

If you are confident in your abilities, then, having caught someone else’s dog by the paws, gradually intercepting, get to its collar and fix the dog so that it does not switch to you. If the stranger’s dog does not open its jaws, twisting the collar, strangle it a little.

With even greater self-confidence, having reached the collar of a strange dog, fasten the leash with which you will fix the dog.

As you can imagine, the final forecast with the latter options is not always unambiguous, the dog may redirect aggression in your direction.

The success of stopping a dogfight depends a lot on the position of your opponent. The survey shows that about a third of dog owners enjoy dog ​​aggression towards each other. The attitude of such owners can range from “figure it out” to aggressive towards your dog and towards you, especially if your dog was to blame for the fight. For example, I ran without a leash.

So, before proceeding with the operation to separate the fighting parties, find out with a couple of phrases the opponent’s attitude to the situation, propose joint actions and, if necessary, apologize.