Dogs love to follow their owners everywhere – even to the bathroom. Behavior that often makes people feel embarrassed. You can find out why there is no reason here.

Many dog owners wonder why their dog keeps chasing them into the bathroom. It seems as if it doesn’t want to leave its owner alone. Regardless of whether you have to do your business urgently, shower, or brush your teeth, the dog always wants to be there. Without its owner, however, a dog rarely goes into the bathroom.

So why do they find it so exciting when we humans are in the bathroom?

We already know that our dog is a loyal friend and that he has a special and unconditional love for us. So this is his way of showing us his affection and loyalty. When he follows his owner, he feels integrated into the family. “The dog follows us into the bathroom for two main reasons: first, because he likes to be around, and second because he suffers from separation anxiety and finds it difficult to take it when his owner is not there,” veterinarian and biologist Felipe Vázquez Montoto told Pettime.

Dog Follows Us Out of Separation Anxiety 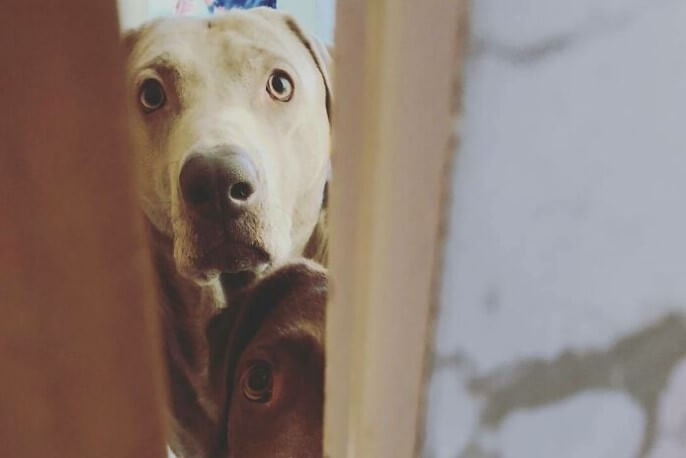 The dog wants to express its love by spending as much time as possible with its owner. Dogs are pack animals and very social creatures. You like to live in a group. This is why they feel unhappy and vulnerable when left alone. Of course, they can also spend time alone when the owners are at work, but once they are home the dogs want to hang out with them. They don’t understand that in some situations people want to be alone. In fact, they think they’re doing us a favor by accompanying us to the bathroom. In addition, they deliberately put themselves as close as possible to us in case we need something.

According to a study by Oregon State University, dogs’ tendency to follow people lies in their genetics. This also proves that it was not people who chose dogs as companion animals because of their cognitive abilities, but rather the other way around: dogs chose people. In any case, according to Felipe Vázquez, the main reason for our bathroom companions is that “our dogs are very bored when we are not at home”. The dog doesn’t want to be separated from its owner for a second, which includes the bathroom.

“Dogs are animals that like to be accompanied so that they can even follow us from one room to the other.”

Dogs Want to Protect Us

The dog loves its owner and wants to protect him. He follows him to make sure he’s safe. At this moment he is a true bodyguard. Dogs think it is important to defend their territory, including the bathroom. Dogs don’t know privacy, they know protection. The concept of the pack is ingrained, they want to keep the group together. That is why they accompany you wherever you go, even into the bathroom. It is a purely instinctive act.

Dog Follows Us Out of Curiosity

There are some studies that suggest a third reason: sheer curiosity. The dog feels at home and likes to keep an eye on what you are doing in each room. He likes being part of the process.

The only way to get rid of the dog is to distract him, for example with toys. Veterinarian Kathryn Primm, on the other hand, writes in an article on this topic: