“He kisses you”, “It’s a gesture of submission”, “He likes the salty taste of your skin” … What can you not hear when you talk to a dog in the face, on the hand, or elsewhere is licked off! This dog gesture puzzles us – we don’t always know exactly how to interpret it. Sometimes it can be annoying or indicate a dog’s discomfort, but this behavior is always associated with positive feelings for most people. Here you can find out all about this gesture made by dogs!

The dog is a social animal, which means that it forms hierarchically structured groups. One of the characteristics of social animal species is their ability to communicate with one another: it is one of the basic conditions for a group to stick together. The communication serves to enable the individual individuals to share their feelings and needs.

Licking is a dog’s communication tool. It is important to understand what this gesture can mean in different contexts: does the licking mean that my dog is normal, or is it a result of a behavioral disorder, an expression of unhappiness?

Contents hide
1 What is the Dog’s Tongue For?
2 What are the Different Meanings of Licking?
3 How Do I Know If My Dog Licks Something or Someone Too Often?
4 How Can You Counteract This Behavior?

What is the Dog’s Tongue For? 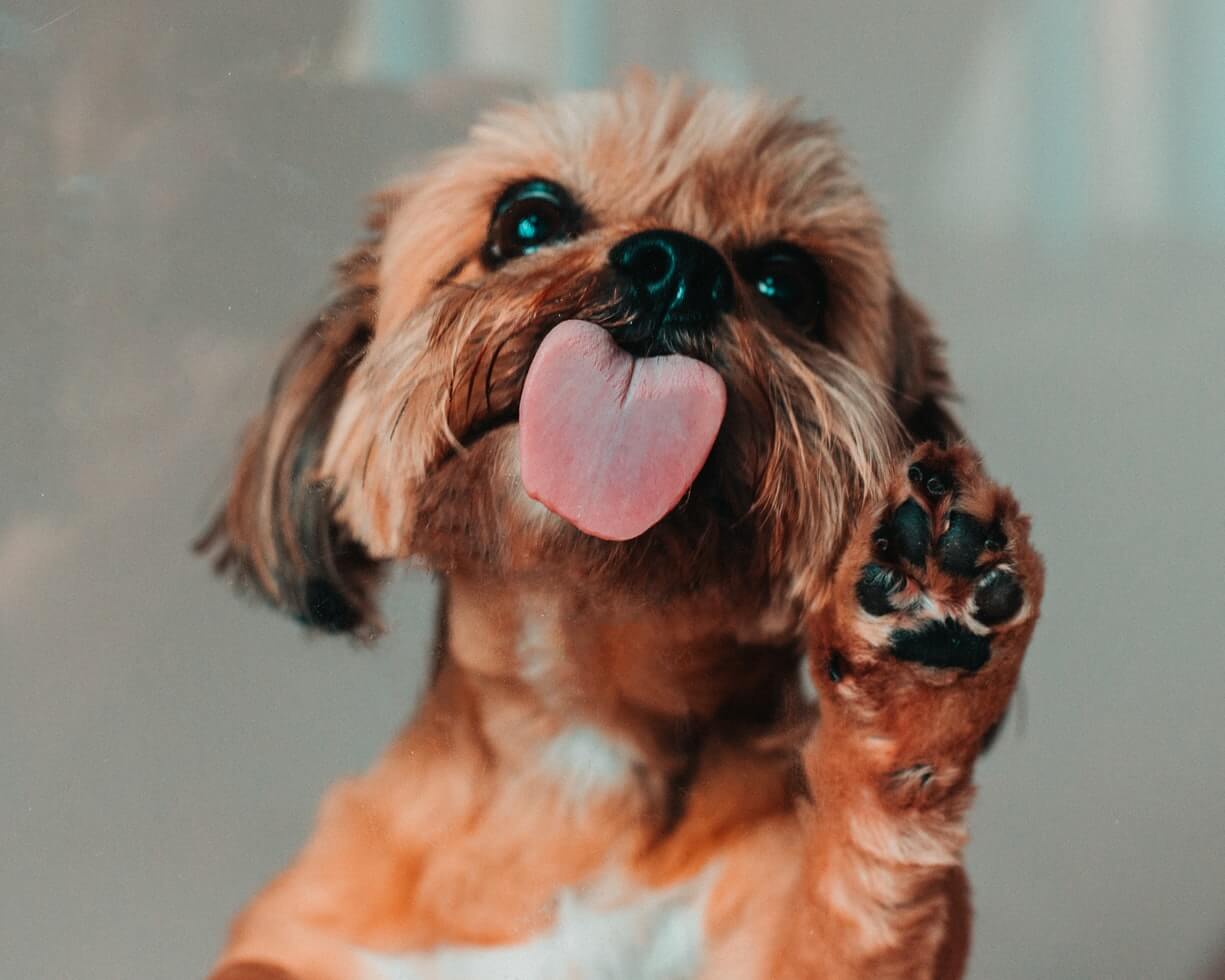 So it is a very versatile tool that the dog uses regularly for various needs. For dogs, the tongue is almost like the hands for humans: It is used for exchanging ideas with our surroundings, for exploring objects, but also for communicating with people of his own kind.

What are the Different Meanings of Licking?

In animal behavior research, one usually first looks at the circumstances under which the animal exhibits a certain behavior in order to then be able to explain it. This can give us valuable clues as to the intention behind it (and which remains theoretical: after all, we cannot ask the dog for explanations or read his mind).

As far as licking is concerned, you have to clearly distinguish between different situations:

This behavior is often mistaken for a gesture of submission, but in reality, a dog has no concept of dominance and hierarchy. This behavior should be viewed as a positive interaction, which can occur in different contexts, and which the dog may use to reduce negative feelings around him.

Loving licking, which a dog’s human companions often interpret as a kiss, should be understood in a very similar way, even if it does not follow a negative interaction. The effect remains the same, namely relaxation, stress relief, and positive feelings in both dogs and humans.

It is interesting to note that such interaction also reduces the stress level of the dog performing the gesture: it also has a calming effect on the animal itself. This ritual is therefore positive for both the recipient and the giver. And the dog can of course lick itself off when it is stressed. In any case, if a dog licks something or someone too often, it can be an expression of malaise.

How Do I Know If My Dog Licks Something or Someone Too Often?

This varies greatly from one individual to another, but once this behavior becomes disruptive it can be considered excessive. This can manifest itself in the form of the duration of the activity of the licking or through the compulsive context in which the behavior occurs.

In any case, only behavioral experts can make the diagnosis, and a veterinarian with knowledge of animal behavior therapy offers the advantage in such a case that he can also rule out biological causes at the same time. The licking may be due to a skin disease, for example. You always have to check the biological causes first before you can think about a purely behavioral explanation.

If you think your dog is behaving abnormally when it comes to licking, don’t hesitate to talk to a canine behavior specialist or a veterinarian who is knowledgeable in behavioral therapy.

How Can You Counteract This Behavior?

In most cases, it is not the dog’s behavior abnormal when it licks someone, but rather this gesture disturbs the owner: as with barking, there are no set rules, but rather differences based on the characters of the people involved and the different ways of life.

If the licking is perceived as annoying or if the dog displays this behavior excessively, one must find out the reasons for it in particular: If the dog seeks attention, if it is an obsessive calming ritual, the dog is expressing stress or discomfort? After all, finding and treating the cause is the best solution to remedy the unwanted behavior.

In addition to treating the cause, a change in behavior can also be brought about by positive parenting methods. These are based on rewards, and therapy consists of teaching the dog to resort to other behaviors and avoid licking. The goal is not to make the interaction negative by using punishments, but on the contrary to use rewards as a source of motivation to encourage the dog to display different behavior.

Ultimately, in the vast majority of cases, licking is very positive interaction with your dog. But pay attention to hygiene – especially with children and when licking faces. In this context, I would like to point out the existence of rare diseases, such as infections with the bacterium Capnocytophaga canimorsus, which can occur as a result of licking wounds.