A formidable giant with a gentle character and unconditional devotion. An ideal watchman, an example of calmness, nobility, and grandeur. A strong dog for people with strong character and considerable experience in dog breeding. An ancient breed from which the whole Molossian group may have descended. 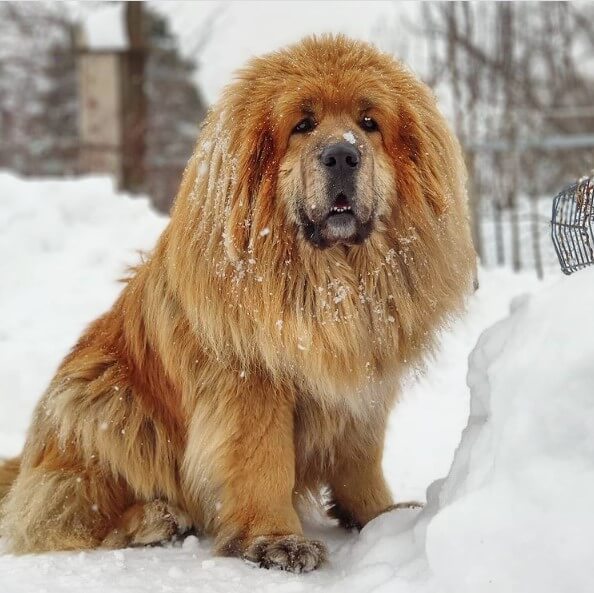 Spectacular Tibetan Mastiffs are one of the oldest dog breeds in the world. The first mentions of it date back to ancient times. Even Aristotle praised the greatness of the Mastiffs. Since ancient times, brave giants were used to protecting Tibetan monasteries, and also accompanied nomads in the Himalayan mountains. According to many dog ​​handlers, Tibetan Mastiffs are not just an ancient breed, but also the true ancestors of the entire Molossian group. However, this opinion is not supported by substantial evidence.

The spread of Tibetan Mastiffs in European countries began in the 19th century. The first known Mastiff was sent by Lord Harding as a gift to Queen Victoria. In 1898, the purebred offspring of Tibetan Mastiffs were registered for the first time at the Berlin Zoo. Today the whole world knows about this breed, but Tibetan Mastiffs are very rare and are considered a real wonder. 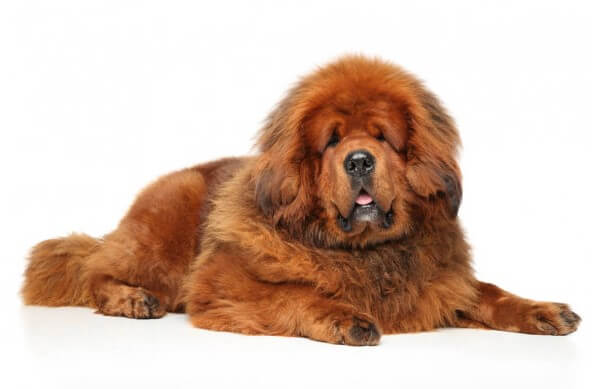 The Tibetan Mastiff is a long-haired large dog, actively involved in the guard service. The height at the withers of Tibetan Mastiffs is at least 66 cm for males and 61 for females, weighing approximately 80 kg.

The Mastiff has a massive body, powerful bones, well-developed muscles. The back is straight, the sacrum is almost invisible. Legs powerful and muscular set parallel. The neck is massive, strong, with a slight bend. The head is massive, voluminous, wide, with a pronounced stop. The muzzle is wide, square in shape. Scissor or pincer bite. The nose is large and pigmented. The eyes are medium in size, oval in shape, set wide apart, in all shades of brown. The ears are medium in size, triangular in shape, drooping. The tail is of medium length, in line with the croup, and curved over the back.

The coat of the Tibetan Mastiff is of medium length, dense and dense. Long hair in the neck area forms a dense voluminous mane – one of the main features of the breed. The color can be black, fiery black, sable, golden, blue (with or without tan). The tan markings (from deep chestnut to lighter shade) are located on the limbs, the tip of the tail, and in the area above the eyes. There may be white spots on the chest and legs. 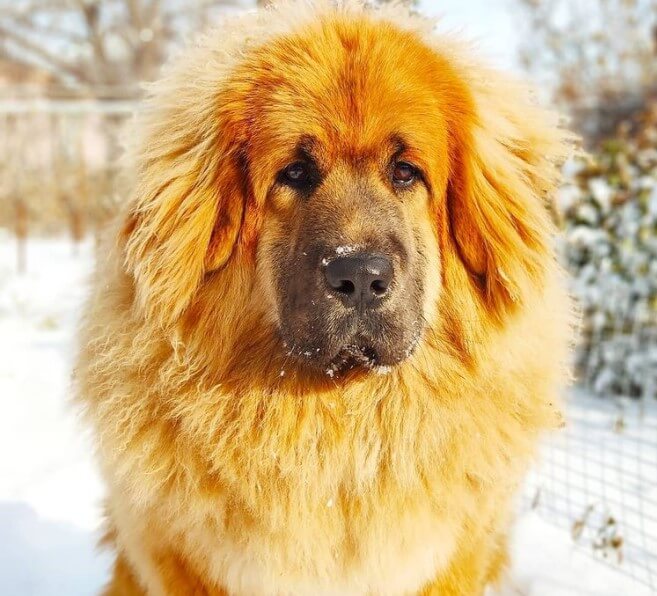 Tibetan Mastiffs are calm, balanced dogs. They are strongly attached to the owner, get along well with children and pets, and also carry out their service responsibly. They have long been used as guards and watchmen – and they do their job perfectly. Possessing a balanced temperament, the Tibetan shows aggression only in extreme cases, having previously warned the offender with a growl.

The Tibetan Mastiff has an innate suspicion towards strangers. It will always be difficult for a stranger to earn the favor of a noble dog. Ideally adapted to guard duty, the Mastiff calmly endures loneliness, but the attention of his beloved master is always the best reward for him. This faithful guardian will always come to the aid of loved ones and will never deceive their trust. Tibetan Mastiff is also the best companion for outdoor trips.

The use of Mastiffs as watchmen over the centuries has left its mark on the breed. Mastiffs are introverts in the dog world who need competent socialization. In addition, they are very large, strong dogs with pronounced leadership qualities. It is recommended to have such a pet only for experienced dog breeders who are well versed in the psychology of dogs and who know a lot about training. 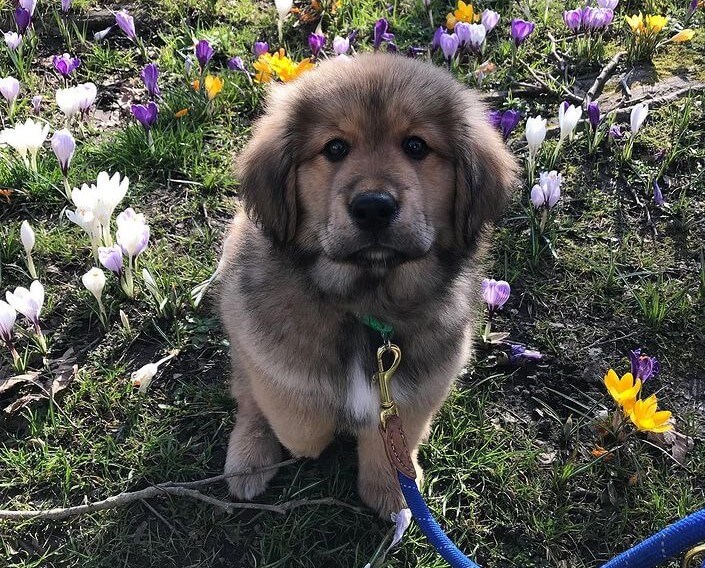 With proper maintenance, adult Mastiffs rarely get sick. However, like all large breeds, they are prone to hip dysplasia, weight gain, and cardiovascular disease. Due to the structural features, there is a high risk of turning the eyelid, which is easily solved with the help of surgical intervention (the operation is simple).

Compared to other large breeds, Tibetan Mastiffs are true long-livers. As a rule, they live for 12 years or more. 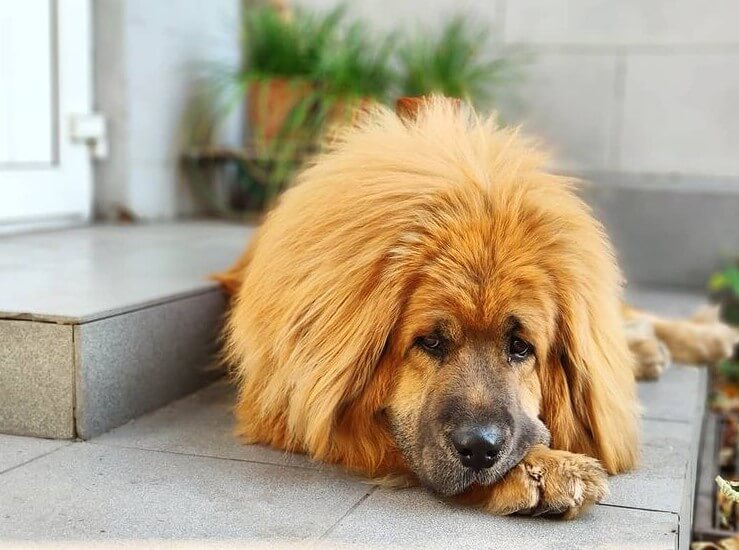 Surprisingly, despite their gigantic size, Tibetan Mastiffs cannot boast of a huge appetite. As practice shows, they eat much less than Labradors or Boxers. But these are not all surprises. This fluffy, huge, seemingly difficult to keep dog requires the simplest care. At first glance, it seems that the Mastiff’s wool is very difficult to maintain in a well-groomed condition, but in practice, brushing twice a day is quite enough for this.

Of course, if you are planning to participate in shows with your pet, then you will have to make much more effort and use special means for washing, a hairdryer for drying, and varnish for fixing the wool. At the show, the Tibetan Mastiff should look presentable and solemn. 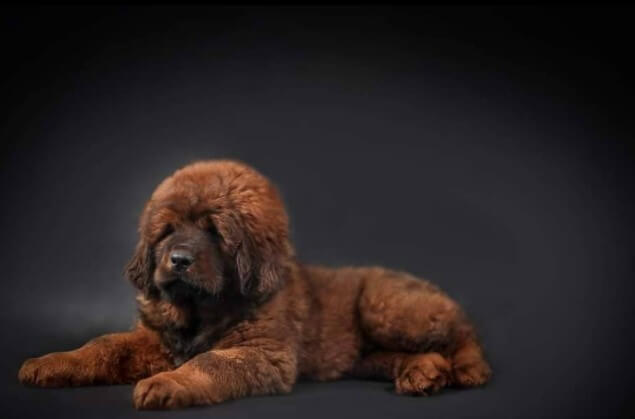 Tibetan Mastiffs are large dogs with a peaceful disposition. They require attention from the owner. Mastiffs will serve you as a great friend and excellent guard. Such a dog will replace friends for lonely elderly people and large families with children. By the way, Mastiff will look after the children with pleasure.