The Weimaraner is Germany’s graceful and fast “Gray Ghost”, loved by hunters and pet owners for its friendliness, obedience, and beauty. These dogs enjoy playing sports and spending a lot of time with their owners.

The Weimaraner was originally intended for hunting large animals such as deer and bears. At first, the “Silver Ghost” was a very popular dog only in his native Germany. Today, these graceful yet demanding dogs can still be found on the hunting grounds, but they are more used as pets. 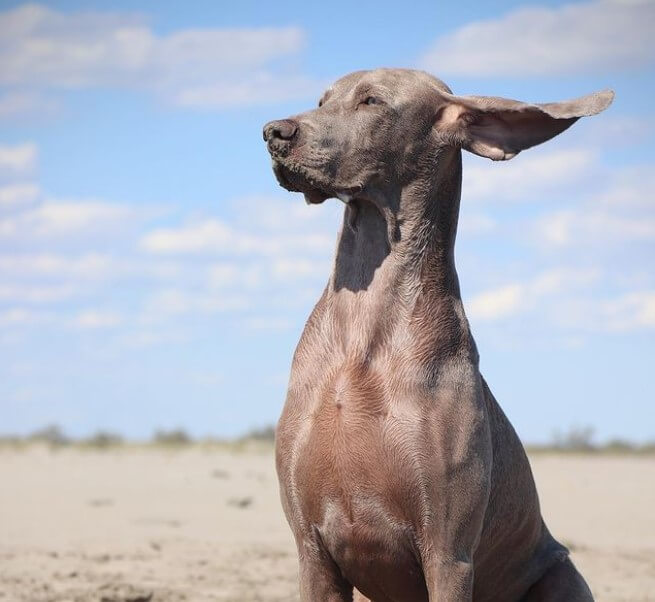 A key figure in the early history of Weimaraner was the Grand Duke of Germany Karl August, who was engaged in inbreeding in the city of Weimar. The Duke, like many European nobles of the time, was an avid hunter. His dream was to develop the perfect hunting dog. In pursuit of this, he is said to have crossed Bloodhounds with various German and French hunting dogs. The result was Weimaraner.

The Duke and his co-workers initially used these unique-looking dogs as hunters for large animals, chasing bears, mountain lions, and wolves. As the population of these predators declined in Europe, the Weimaraner found a new niche as a versatile hunter that detects and retrieves wild birds.

In the early years, the official name of the breed was Weimar Pointing Dog. Dogs became popular in the old German court because of their ability to provide quality service and their ability to do many different things. The Weimaraner was a jealously guarded secret of the German aristocracy for many years, and breeding specimens of the breed did not begin to spread around the world until the late 1920s. 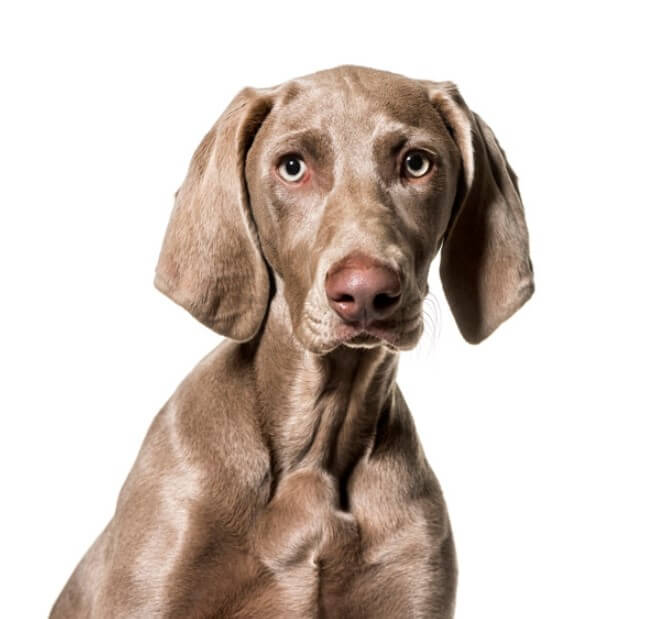 The Weimaraner looks fit and athletic. The dog is of medium height and even taller, in proportion to the build, with distinct and curving lines of the body. Weimaraners are excellent swimmers, as evidenced by their webbed feet. Males, recognizable by their characteristic silver-gray color, reach 59-71 cm at the withers, and females – 56-66 cm.

The weight of males varies from 30-40 kg, and females 25-35 kg. A correctly bred Weimaraner will be a solid color with a barely visible white spot on the chest. The face with rounded amber or blue-gray eyes, framed by long velvet ears, looks intelligent. Overall, the breed presents a picture of streamlined grace and balance. A well-groomed Weimaraner is a spectacular sight.

The head is proportional to the body. The forehead is flat, with a straight groove. The occipital protuberance is slightly protruding. The cheekbones are pronounced. The muzzle is elongated, graceful, straight, sometimes with a hump. The upper lip hangs down slightly, covering the lower jaw and creating a crease at the corners of the mouth. The ears are wide and long, set high. The nose is dark brown, gradually becoming grayish. The eyes are round.

The body is sturdy. The neck is strong, muscular, and set high. The chest is wide, the ribs are rather prominent. Strong back, muscular and elongated. The tail is set high, hangs down in calmness while moving it is parallel to the ground. Legs are taut, muscular, regular shape. 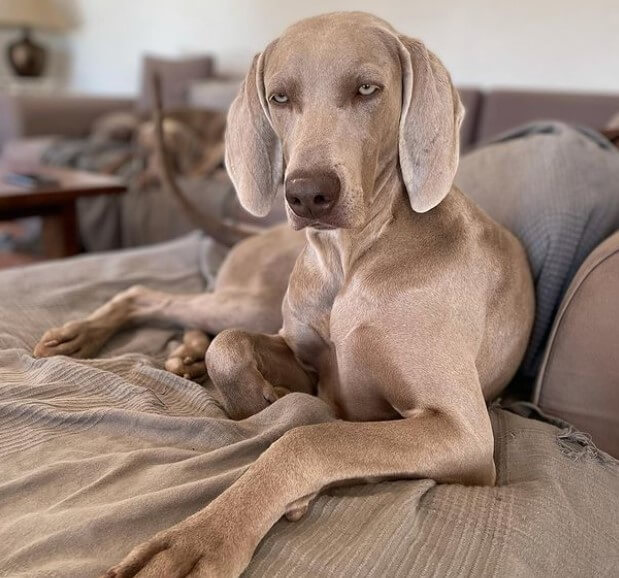 The Weimaraner is a very intelligent and confident hunting dog that tracks and kills prey on command. The dog is suspicious of strangers and needs time to get close to new people. The defense reflex is very strong and a confident dog doesn’t hesitate for a second to defend his family or his territory.

Weimaraners are not a breed for everyone. If you decide to get a dog for the first time, you should think before making this serious choice. Weimaraners have a lot of energy and need a lot of exercise. Without this, they can become nervous and agitated. Their huge amount of energy and ingenuity will allow you to explore the surrounding area. If not trained and controlled, they will chase and kill anything that resembles prey, including cats and small dogs, mice, frogs, birds, etc. They will then proudly present their trophies. They will also chase running people and cyclists.

Weimaraners – have independent thinking and will test the owners, figuring out the limits of what is permitted. If you have never owned a Weimaraner before, but want to acquire this breed, find out more about it and attend special classes for dogs with a trainer.

The Weimaraner can be a personal hunting companion, compete in agility and be a good family friend. This dog is very affectionate and, with good training, can be an excellent lifelong partner. 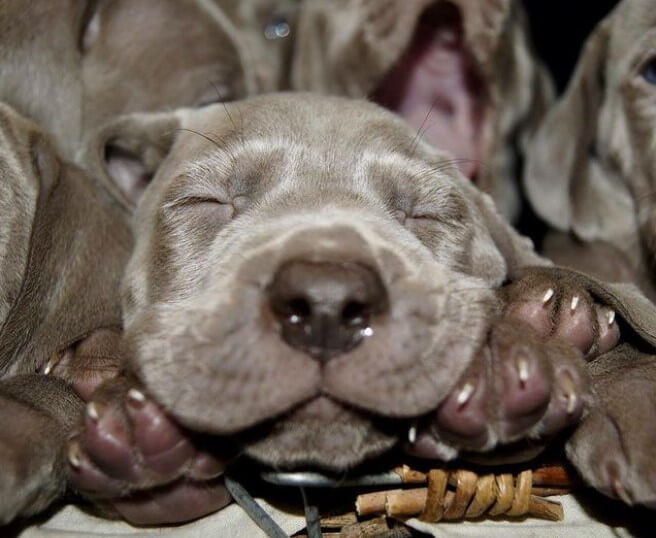 Weimaraners are best for active families where at least one person is at home most of the day. 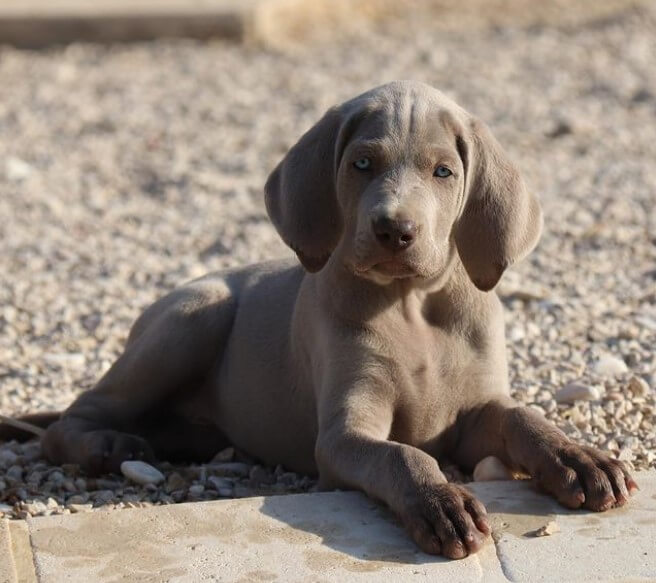 Although Weimaraner dogs are healthy and strong, they can suffer from certain genetic problems. If you are considering adopting a Weimaraner, it is important to have information on all aspects of this breed’s life, including potential health problems that may arise. The most common Weimaraner diseases include: