Coconut oil has been part of almost every hip trend kitchen for a number of years and is literally on everyone’s lips. But now the all-purpose weapon for beautiful skin and much more has come under fire. Among other things, because coconut oil is not toxic, but mainly consists of unhealthy saturated fatty acids. Meanwhile, the trend towards coconut oil has arrived in dogs, especially in the fight against ticks, grass mites, and fleas. What does coconut oil do for dogs? 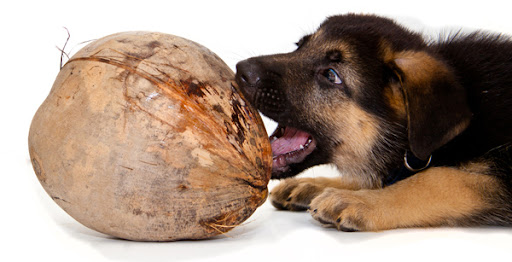 Coconut oil is the most popular for dogs because of its anti-tick and flea properties. Whoever rubs the dog with the fragrant oil allegedly keeps the pests away.

Sounds great? But it’s not that easy. Because rubbing means above all at the beginning: before every walk with the risk of ticks, rub the whole dog with an amount up to the size of a walnut. The head, chest, and legs are particularly important. Long-haired dogs that are rubbed with coconut oil from head to paw smell nice, but quickly look like poodles that have been doused. That would be bearable, but unfortunately, coconut oil does not offer reliable protection. The editorial dog’s balance after a week of coconut oil in combination with garlic powder showed a remarkable number of 14 ticks discovered. This was followed by treatment with a classic spot-on from the veterinarian, the notorious chemical club. Balance after a week: a tick that tumbled out of its fur by itself. 14: 1 for the spot-on. Another disadvantage: Many dogs love to lick the coconut oil off their fur. This can lead to diarrhea.

So don’t use coconut oil against ticks? Some users report that their dog hardly has ticks with coconut oil. Trying it out can be worthwhile – there is no guarantee. However, the effort is relatively high and the dog is always slightly greasy. Anyone who travels in areas with a lot of ticks and has an animal tick magnet by their side should rather ask the vet for a suitable remedy.

Ticks carry a number of diseases that are dangerous to dogs.

In long-haired dogs, in particular, ticks are difficult to find before they have suckled themselves. Coconut oil has a prophylactic effect against fleas – and only if you are lucky.

Coconut oil is also said to help against annoying endoparasites: against worms. There is a lot of information on this on the Internet. However, if you look critically, you will see: Most of them come from sites that offer coconut oil or link to corresponding shops. A rogue who thinks bad?

Sometimes there are adventurous theories to read: The coconut oil should prevent the worms from hooking themselves on the intestinal wall. It is more likely that the lauric acid damages the cell walls of the worms and that other ingredient have a positive effect on the mucous membrane of the intestine. However, it is unclear how large quantities the dog would have to consume in order to achieve such an effect. Because too much of the oil can lead to diarrhea and, in the long term, cardiovascular diseases. Coconut oil, therefore, does not offer reliable protection against worms. At most, it creates an environment in which the parasites do not feel comfortable. This is how you can prevent worm infestation in some dogs. Anyone who relies on coconut oil to repel worms should give their dog a fecal sample to the vet at least every three months. If it is free of worms, it is – maybe – coconut oil. Against an already existing worm infestation, you should take a worming treatment from the veterinarian. If you want to administer coconut oil as a preventive measure, you can add half a teaspoon to a full teaspoon of coconut oil for every ten kilograms of body weight and day in the dog’s food.

Once the mites are in the ear, it is too late to use coconut oil – then it is the vet’s turn. But dogs that are prone to mite infestation can be protected with coconut oil. To do this, massage a tiny amount rubbed onto your fingers into the auricles. The scent is supposed to keep mites away.

A good application for the supposed all-purpose weapon is the dog’s paws. Because hard road surfaces, road salt, or gravel clog the bales. The skin becomes cracked, which can lead to pain and injury. If you regularly rub your dog’s balls with coconut oil, you can prevent this. The skin stays supple. Especially in winter, coconut oil on the pads of the paws is a real treat for your four-legged friend. Coconut oil can also help with rough skin or slightly sore spots. An antibacterial effect, as is often propagated, has not been proven.

Is Coconut Oil Harmful To Dogs?

As is so often the case, the dose is crucial. If you add small amounts of coconut oil to the food every day, your dog will not be harmed. But sensitive four-legged friends can react to the additive with diarrhea. Since coconut oil consists of 90 percent saturated fatty acids, experts advise against frequent consumption. The extent to which the fatty acids are harmful to dogs has not been proven. Anyone who has a dog with diabetes should not add coconut oil to their food. Because this can adversely affect the ketone levels in the blood, to which diabetic dogs are more susceptible. In the case of pancreatitis in the dog, you should only add coconut oil to the feed after consulting your veterinarian. Be aware that many dogs will lick coconut oil off their fur. This must be taken into account with regard to the recommended maximum amount of one teaspoon per ten kilograms of body weight. Sniffer dogs and other nose workers can sometimes sniff less well due to the regular consumption of coconut oil.

Coconut Oil for the Dog: Top or Flop?

Even if you read differently on many Internet sites: Coconut oil is not a miracle cure.

In addition, the boom around the oil of the hairy nut harbors the risk of a monoculture similar to that of palm oil. As with so many of the supposed “superfoods”, the following applies: first think, then use. Anyone who already has a glass of coconut oil in the house can try out whether the fragrant content brings added value for their own four-legged friend.