All dogs bark, howl, whine, and this is normal because with the help of these sounds they communicate with people. Guard dogs are trained to give voice to warn of approaching strangers. But sometimes the dog’s barking is excessive and useless – it may seem to you that the pet is barking just like that. Let’s take a look at the main reasons why most dogs bark.

In fact, of course, dogs don’t bark just like that – there is always a reason. You also need to understand that there are breeds that bark more often than others. For example, many hunting dogs were bred by barking to scare prey, so the beagle, dachshund, fox terrier, and other hunting breeds often use their voices. At the same time, for example, Basenji, on the contrary, does not bark at all but uses other sounds for communication.

If you do not like that your pet barks often, you should first understand the reasons for this behavior.

Basically, all dogs bark for one of the following reasons: 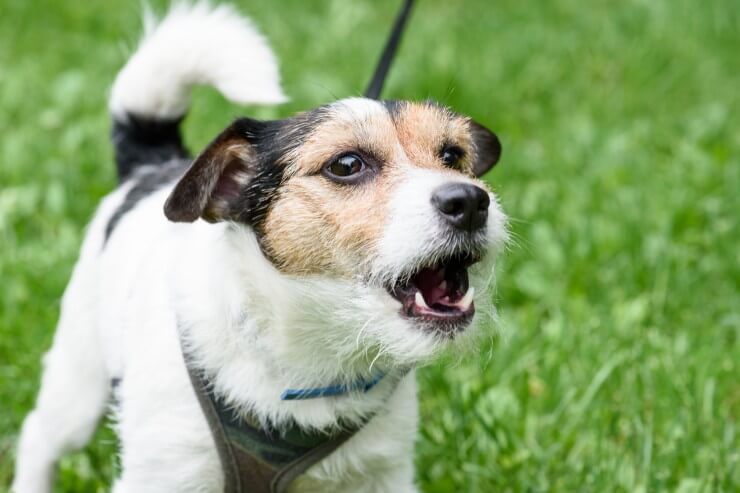 This is the most obvious reason. It is natural for a dog to bark when someone is at the door or when strangers pass by a house or car. This is how the dog warns of its presence and readiness to defend its territory and its owners. This barking is usually harsh, loud, and overbearing.

If your pet barks only for this reason, then perhaps you should not wean him from this, because such a warning can be very useful.

You might be surprised to learn that some dogs calm themselves down by barking. If the dog is worried about something – for example, because the owner leaves the house and leaves him alone, he may bark. Usually, this barking is high and may be accompanied by whining.

To correct this behavior, you first have to figure out what exactly causes anxiety in the dog. And, most likely, you will not be able to solve this problem on your own – you will need the help of a zoopsychologist or dog handler.

This barking is usually not confused with anything. This is how the dog tries to draw your attention to itself so that you, for example, play with it.

Usually, puppies behave this way – they bark during the game from excitement and an overabundance of emotions. Older dogs may bark excitedly when called for a walk. This is how pets express their joy.

Reactions to Other Dogs

You can often find such a scenario: one dog on the street or in the next apartment began to bark, and after it, all the dogs around him joined in barking.

If the dog is bored or lonely, it may bark or howl. To fix this, you need to spend more time with the dog – walking with it longer, training it, playing with it so that it splashes out all its energy, and rests at home, and does not bark. Buying new toys or bringing a second pet into the house can also help to keep them from getting bored.

In any case, once you have determined the cause of your dog’s barking, it will take time and possibly professional help to deal with it.