Choosing a Native American dog name may seem quite a stretch at first. But the Native Americans are known for their closeness to nature and animals. Indians have always had a special and deep bond with dogs. An Indian proverb says: “Be my dog’s friend and you are mine too.” 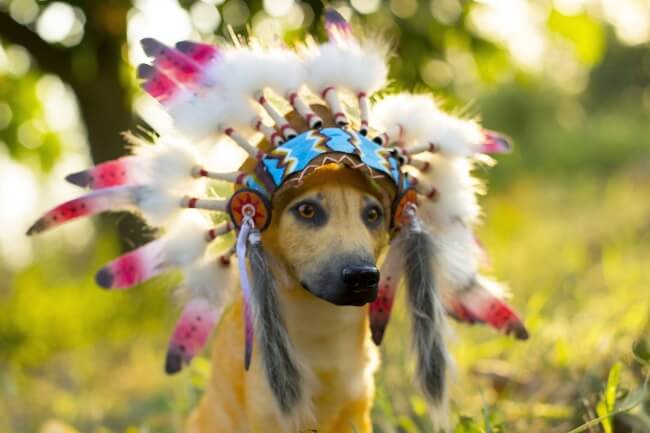 The following Indian dog names make a true chief or a graceful Indian princess out of every four-legged friend.

This beautiful name is a male first name. It is easy to pronounce and has a touch of mysticism. Akai means “the wise one”. Therefore, it is a great choice for clever males, such as German Shepherds or Border Collies. Another possibility: to give this special name to an older male from animal welfare.

The name Cheyenne goes back to the North American Indian tribe of the same name. In Germany it is an approved maiden name, worldwide it is also given to boys. But no matter whether a bitch or a male: Cheyenne is undoubtedly an extraordinary dog name for very special four-legged friends!

For brave males: Chitto is an Indian male given name and means “brave” when translated. If a puppy or an adult male is bold and fearless, then Chitto is exactly the right choice of name.

A rare name for males: Even if the name is translated from Indian as “flat or desolate land”, Kenai is ideal for a four-legged friend. It impresses with its sound and is also short and easy to pronounce.

For many, the dog is the best friend in life. Therefore, the name Lakota is 100% true with its meaning. Lakota means “friend” or “ally” and is suitable for bitches.

Mato is an Indian name for boys with a meaning that has it all. The name is related to a strong animal on four paws: it means “the bear”. Thus the name is perfect for all dogs with a bear-like appearance. The size does not matter: from dwarf peaks to chow chows to Newfoundlands, Mato fits perfectly.

For females: Tila is an Indian girl’s name and means “in black water”. Even if the water is ideally crystal blue, Tila is perfect for dogs who like to be in the cool water. The name is made for outstanding swimmers like water dogs.

Dogs enrich life and give their people indescribable happiness. Therefore, Wapi is an appropriate choice of name for all male four-legged friends. The Indian name means “luck” and sounds particularly cute and lovely with a Labrador or Golden Retriever, for example.

For males: The male first name Yari means “strength and strength”. However, this is more about inner strength. Yari is further translated as “the power of the heart”. Thus, this beautiful name is suitable for both large breeds of dogs and small breeds of dogs.

The enchanting name Yoki joins the list of Indian dog names. This is a name for bitches that means “rain”. Incidentally, in Japanese, the name stands for “bluebird”.

Once you have decided on an Indian name, an accessory completes the relationship to the Wild West: How about a dog tipi? It not only exudes Indian flair in your own four walls – but the tent is also a perfect retreat for dogs.