The Yorkshire Terrier breed boasts a large number of different species. So, depending on the size of the Yorkies, they are divided into standard, miniature, and super miniature individuals. Also, the coat color is also divided into certain types of these terriers. The youngest group is the Biro Yorkie Terrier, whose color includes white and chocolate brown shades. 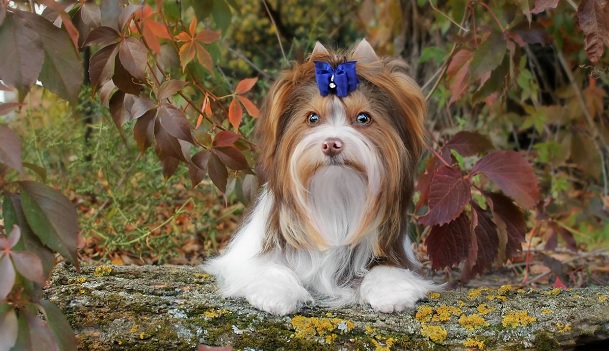 For the first time puppies with an unusual color appeared in 2004. The parents of the first Biro-Yorkies were Biewer Terriers belonging to the breeder Birgit Resner, who also differ in coat color from the standard representatives of the breed. Just a few weeks later, several unusual puppies were also born in Robert Kira’s kennel.

The breeders liked the interesting appearance of the kids so much that they decided to breed a new type of terrier with a chocolate-white coat. The name of the breed was made up of the first two letters of the name Birgit and Robert – BIRO.

Important! This species has not yet received official recognition, so all standards are approximate.

Height. Adults at the withers reach a height of 17-22 cm.

Weight. The bodyweight of Biro Yorkies ranges from 2.7 to 3.1 kg.

Color. The coat of these dogs is a combination of chocolate and white tones, possibly the presence of a golden hue.

Coat. The Biro coat, like all other Yorkies, is gorgeous in appearance and pleasant to the touch. In structure, the hairs resemble human hair, they shed little and grow continuously.

Ears. They resemble an isosceles triangle in shape, set high on the head. On the outside, they are covered with long and thick hair.

Tail. The tail is rather long, rising high. Decorated with a lush “fringe” along the entire length.

Although Biros are not officially recognized, the path to exhibitions is not closed for them. However, disqualification cannot be avoided if the dog has:

Important! Also, individuals who behave too aggressively or, conversely, timidly, will not be allowed to participate in competitions.

Since the direct relatives of all Biro Yorkies are Biewer Yorkies, they inherited the main temperament traits from them. These miniature tetrapods are quite smart, sociable, and understand their owners literally from half a word.

If necessary, terriers can demonstrate practically fighting courage and fearlessness. Without measuring their strength, they rush to taller and larger dogs, absolutely not thinking about the consequences. It is because of these temperament traits that small dogs make good bell guards. One has only to approach the stranger to the door, and then a loud and barking bark will be heard.

Important! Biros are very attached to their owners, so leaving them alone for a long time is not recommended.

In order for the Biro Terrier to grow up to be sociable and in all senses positive pets, the owner needs to devote a lot of time to his upbringing and socialization. If the puppy is not brought out and not introduced to other people or dogs, he can grow up cowardly and aggressive.