Dachshunds have short legs and a long body, the body shape, and size of the animals are ideal for hunting badgers and other burrowing animals, but active representatives of the breed with an inadequate amount of physical activity, the wrong approach to training, and feeding are prone to back problems. However, timely taken precautions will save the animals from back injuries and other diseases, thereby prolonging the life of the pet.

Contents hide
1 Dachshund Back: Pain and Issues
1.1 Symptoms of an Intervertebral Disc Disease
1.2 Treatment and Rehabilitation
1.3 Sausage (Weiner) Dog Back Problems
2 Precautions
3 The Correct Position of the Dachshund in the Arms

Dachshund Back: Pain and Issues

Symptoms of an Intervertebral Disc Disease 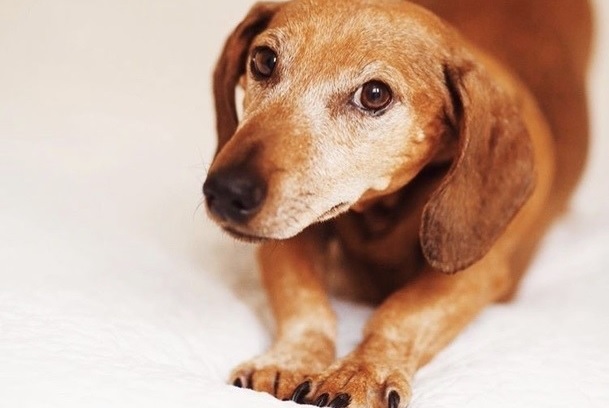 Representatives of the breed are very active, but sometimes their behavior and mood change. If a dachshund has a backache, it will not be able to directly inform the owner of this, so it is important to observe any changes in the pet’s behavior.

With a disease of the intervertebral disc, dachshunds lose the desire to move, because of the pain they do not even turn their head and neck, some dogs lie with their heads down, moving only their eyes.

Experiencing back pain, dachshunds walk hunched over, they can assume a position in which the back is strongly arched. Animals experience weakness, possibly involuntary urination. Appetite decreases, animals may refuse food and water all together, because when the head is tilted to the bowl, they feel pain. When touched, animals suddenly begin to whine in pain, tremors, and loss of coordination are observed.

In severe cases, it paralyzes one or more limbs, as a result, the dog limps or drags a limb behind it. There is a “drunken” gait.

Inaction on the part of the owner can lead to the death of the animal caused by sudden cardiovascular collapse.

When contacting a veterinary clinic, a complete neurological examination is carried out to determine the location of the damaged disc, or to identify other back diseases in dachshunds. The examination includes MRI, as well as X-ray, which allows you to identify other possible causes of the spine, such as fractures, tumors. A lumbar puncture may be taken to rule out cancer and infectious diseases.

The earlier the disease is diagnosed, the higher the chances of the animal recovering. Treatment for the disease may include medication or surgery. But in any case, the dog is provided with complete rest.

If the dachshund cannot get up on its own to change position, then it is necessary to turn the animal over every few hours to prevent the appearance of bedsores, as well as help the dog to relieve himself, to give food and water.

The rehabilitation period includes a number of procedures, including acupuncture or electroacupuncture, to help restore nerve connections in the body.

Passive massage of limbs and muscles not related to the site of injury improves blood circulation, lymph circulation.

When the condition improves, other rehabilitation techniques are used to help the body recover. This can encourage your dog to swim in the water.

A positive prognosis depends on the duration of the clinical signs and the severity of the disease.

If the dachshund is unable to move, but the sensitivity of the legs remains, then there is an 85-95% chance that the animal will walk again after the operation. On average, animals recover in 2-6 weeks.

You can save a dachshund from back problems if you follow a few rules. It is important to monitor your pet’s activity. Ideally, the dog should not run quickly, jump, tug-of-war, or carry out other actions that are accompanied by excessive stress on the spine. You can not play roughly with a dachshund, flounder, abruptly raise the dog in his arms, and this must be understood by both the owner himself and the children, who often do not control their actions in playing with the dog.

Care should be taken to ensure that the pet does not have access to the stairs or make sure that the animal climbs the stairs, not up the stairs (even very slowly), but along the ramp (inclined flat surface). Climbing stairs causes excessive pressure on the spine. You can feel the load on the dachshund’s back when overcoming steps if you imagine yourself trying to climb an obstacle that is higher than your own height. The steps of the stairs are often higher than the dog itself, so you need to protect the pet from climbing the stairs on its own.

Dachshunds love to jump and climb furniture, but should not be allowed to do so. Having gained patience and choosing the right approach to training, you need to wean the animal from jumping. If the dog is used to sleeping on the bed with the owner or likes to rest in places higher than its berth, then you can install a ramp next to the bed, or control the dog’s movements and every time the animal wants to climb onto the sofa (bed) or jump off it, take hold the dog in your arms and carry it carefully.

An alternative option is to equip a comfortable resting place in the cage, so that the dog does not feel that he is being punished, but perceives the cage as a place of solitude, rest.

It is recommended to walk the dachshund on a leash in combination with a harness, and not with a collar. The harness allows you to distribute the force from the taut leash over the body area, thereby reducing the risk of damage to the cervical vertebrae and back.

Representatives of the breed are active and energetic, they like to run, play, jump, show curiosity, but this is a threat to animals. It is important to reduce the stress on the back, but at the same time do not drastically limit the animals in what they like.

Dachshunds are prone to obesity, and excess weight provokes the development of a number of diseases that worsen the health of the animal, including disease of the intervertebral discs. Therefore, it is important to select a commercial food according to the age, physiological state, level of activity of the dog, or to formulate the correct balanced diet with an accurate calculation of the daily feeding rate for each individual dog. Obesity can be avoided by daily walks (2-3 times a day) and regular exercise.

The Correct Position of the Dachshund in the Arms

It is important to know and be able to handle the dachshund correctly. To do this, put one hand under the dog’s chest. With the other hand, grab the animal from behind, bringing your hand under the lower abdomen between the hind legs. It is important to always hold the dachshund by holding the hindquarters, otherwise, damage to the spine is possible. 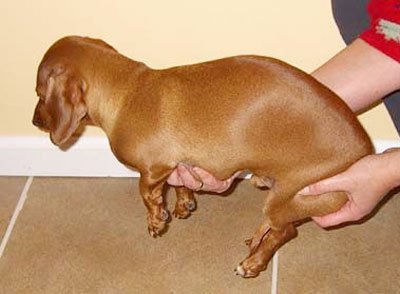 Raise the animal gently, and hold it closer to your chest. You need to lower the pet carefully, do not let it jump off your hands.