It is no longer a secret for anyone that even the most harmless dog, if not educated, has every chance of turning into a real problem. So, even such clever people as dachshunds, if they are not instilled in elementary norms of behavior, get out of control. Moreover, the temperament of the representatives of this breed is rather wayward. That is why it is necessary to start raising a cheek from the first minutes of his being in a new house.

Contents hide
1 How to Train a Dachshund Puppy
1.1 Initial Stages
2 The Intricacies of Training Adult Dogs

How to Train a Dachshund Puppy 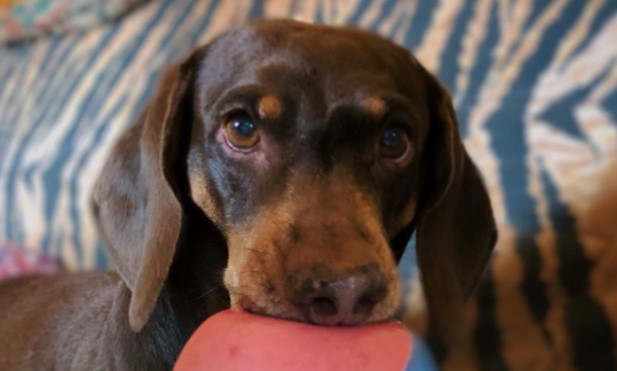 Awareness of themselves as separate individuals in dachshund puppies occurs at about 2-2.5 months. It is at this age that they usually move to a new home. It is at this moment that you need to start training. However, the owner must remember that he is dealing with a child who, due to his age, is still unable to concentrate on one activity. The puppy may refuse to do the same action several times in a row. Pet training must be approached with great responsibility. You need to be patient. Shouting at the dog and hitting it is strictly prohibited.

Important! You need to work out a command with a small dachshund for no longer than 5 minutes.

The first thing you need to train your pet is to respond to the name. The dachshund must be able to behave on the street, know what it can do at home and what it cannot.

You need to accustom your pet to the name in a gentle voice. The name must be repeated every time the puppy is called, praised, or scolded for wrongdoing. The baby needs to be accustomed to the place and the bed as soon as possible. Even if the dachshund resists sleeping in the place chosen by the owner, you cannot follow her lead.

While the puppy is small, he can relieve himself at home on a diaper. To do this, it must be taken at a certain time in a place allotted for these purposes. This will make it easier to train the dachshund to ask to go outside.

The development of teams begins at the age of three months. “To me!” and “You can’t!” are among the first to learn. The puppy, after he correctly reacted to the command given, must be praised and treated with a treat. You need to give commands in a clear and even voice.

Starting from 4 months, a small dachshund can begin to actively determine the boundaries of what is permissible. The puppy will play with the owner’s things, may start to spoil the furniture. It is important to make him understand that it is not good to behave this way and that such actions will always be followed by punishment.

The Intricacies of Training Adult Dogs

Already grown-up puppies can begin to teach more complex commands. If the weather permits – training can be transferred to the street, if not – education can take place at home.

An adult dachshund should know the basic commands. These include:

“Sit!” Teaching a dachshund to execute this command is simple. To do this, raise your left hand with a treat up. With your right hand, you need to press the dog on the croup and say out loud what they want from it. Learning shouldn’t take long. You can repeat the exercise several times, but you need to influence the dog no longer than 5 minutes.

“Down!” This command is considered one of the most important for hunting dogs. You need to learn it in a place where nothing will distract the dog. The owner should kneel in front of the pet and show with his hand what position she should take. The pet should lie for about 2 minutes, then return to its original position. The exercise must be repeated several times.

Don’t do that! The purpose of this command is to undo any actions of the animal. Give the command in a serious voice.

Important! Only the owner should train the dog. The learning process should not be trusted by outsiders.

You can train your pet in special commands with the help of a dog handler. A professional will help you understand the intricacies of a dog’s character and select a training program suitable for it. The dog handler will help teach a disobedient pet the norms of behavior in society, solve the problem of cockiness, unwillingness to walk on a leash.