Everyone who is going to take a female dachshund into the house should take into account the characteristics of her female body. At some point, the dog will begin estrus, which will allow it to become pregnant and give birth to offspring. Breeding, or neutering a dog – each owner decides for himself.

Contents hide
1 Estrus in Dachshunds
1.1 How to Recognize When a Dachshund is in Heat
1.2 Dachshund in Heat
1.3 How to Care for a Dog During Estrus?
1.4 How to Understand That Fertilization Has Taken Place? 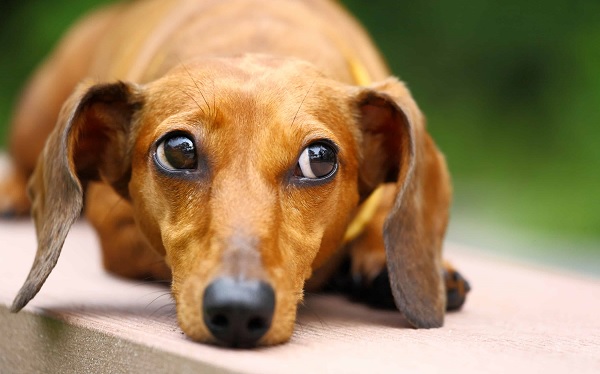 Such an incomprehensible, at first glance, the word is called the physiological process that every female dog faces. The first heat is a sign that the female is ready for further breeding. The time of the onset of the first heat may vary depending on the individual characteristics of the pet. It usually doesn’t happen before 8-9 months.

Important! Dogs that have the first heat before 7 months of age and those that do not have it at 15 months of age should be seen by a veterinarian.

How to Recognize When a Dachshund is in Heat

Usually, when the first heat is approaching, the dog begins to behave differently. The dachshund, which yesterday behaved agreeably and was very obedient, can change dramatically. The pet may begin to snap back, resist following commands. Therefore, education and training should be postponed until the hormonal background of the pet calms down a little.

Important! Of the physiological signs, it is worth highlighting an increase in the mammary glands, swelling of the external genital organs.

On the street, the dachshund urinates more often, marks the territory. Do not let the animal off the leash during this period. It is also necessary to ensure that no males are spinning around the female. You will also have to refuse to participate in exhibitions. Dogs that are in heat for the first time are not attracted to hunting or training.

Conditionally, estrus is divided into three stages. Each of them is responsible for a specific process leading to fertilization. Dachshunds are in heat as follows:

The first stage is called proestrus, and its duration usually does not exceed 9 days. During proestrus, the dachshund changes its behavior, it may begin to refuse food, or, conversely, demand that it be fed again. Bloody mucus is secreted from the dog’s genitals. The female is indifferent to males during this period, she may even show aggression towards them.

The period that follows proestrus is called estrus and lasts about 20 days. The discharge becomes more transparent, turns yellow, and changes the smell. The genitals become noticeably larger in size. Oestrus is the period of ovulation. It is during this period that it is best to agree on mating with the owners of the dog.

Metestrus lasts from 18 to 28 days of estrus. The discharge gradually ends. Conception usually does not occur at this point.

How to Care for a Dog During Estrus?

Owners who do not intend to breed a dog should pay special attention to the pet during estrus. To avoid stains on the floor and furniture, your darling needs to wear special panties. It is recommended to put a disposable diaper on the bedding.

On the street, you need to watch how the dachshund behaves. To avoid unwanted mating, it is necessary to limit her contact with other dogs. It is recommended that those dogs that are free-range be kept on a leash or closed in the yard. Particular attention should be paid to the bitch’s health. During estrus, she has every chance of picking up an infection.

How to Understand That Fertilization Has Taken Place?

Dachshunds usually take a long time to get pregnant. Sometimes the dog has to be knitted 2 or 3 times to achieve the desired result. You can determine the onset of pregnancy if you take her 35 days after contact with the dog to the veterinarian. The doctor will feel the belly and determine if there are any puppies. If the dog is pregnant, her belly and nipples will begin to enlarge. The skin on the abdomen becomes lighter. Toxicosis may even begin.

The further reproductive health of the dog depends on how correctly and thoroughly during this period the owner takes care of the dog.