In the 19th century, one of the entertainments of both the working class and noble persons was dogfighting and baiting of bears and bulls.

Dogs endowed with a fighting spirit were appreciated, their appearance did not really matter, the main thing was that the dog could fight and win, and this required courage, dexterity, passion, and fearlessness. But dogfighting in 1835 in England became banned, and entertainment has not lost its popularity. The enterprising British began to have smaller dogs for these purposes, which could easily be hidden under their coats, in case the police appeared. Fond of breeding and trading dogs, James Hinks from Birmingham, crossing different breeds, was able to breed the first bull terrier, very different from the modern one. The first bull and terriers bred were considered gladiators among dogs who fought to the death for their master. 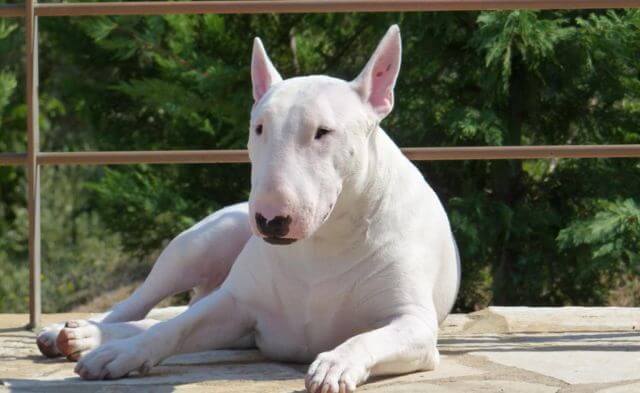 James Hinks used a variety of dog breeds to find the perfect dog for him. It is likely that the Bull Terriers were bred as a result of crossing the old-type Bulldogs and English White Terriers. The ancestors of the bull terrier had massive and short heads, blunt muzzles like a bulldog, compact bodies, barrel-shaped limbs, and did not look very attractive.

The history of the Bull Terrier breed continued. By the end of the 50s, Hinks, conducting numerous experiments with the participation of not only English terriers but also Dalmatians, bred a family of pure white dogs, which were already called bull terriers. The features of a bulldog have already been largely lost, the head has become long and smooth, the muzzle is strong and without pendulous lips, the neck is long and strong, the animal has become more energetic, while all the best qualities have been preserved – courage, vigilance, muscularity, intelligence, and intelligence. Hincks, whose goal was to breed white and graceful dogs, attempted close inbreeding by mating blood individuals, that is, a mother with son, a father with daughter. It is not known exactly on the basis of which breeds, other than those listed, the Bull Terrier was bred, but there are suggestions that there is an admixture of the blood of greyhounds, hounds due to the birth of puppies with ears like hounds, with a muzzle like greyhounds, as well as Foxhound, Greyhound, Spanish Pointer.

As a result, it was possible to breed a more elegant and attractive dog that has not lost its stubbornness, strength, and power. Hinks preferred white dogs and his “gentlemen in white” won the love of many people, conquering everyone at exhibitions and quickly gaining popularity. White Bull Terriers were called white gentlemen or gentlemen for their good breeding and ability to protect their owner and his family while controlling their aggression towards outsiders.

Since the 19th century, miniature bull terriers began to gain popularity in England, which weighed up to 3.6 kg and were considered excellent rat-catchers. In the 1820-the 1850s, toy bull terriers weighing 2-3 kg were especially popular in England, and both were used to participate in battles. Miniatures obtained as a result of crossing between standard bull terriers and toy terriers. Their breeding was accompanied by difficulties related to the health problems of the dogs. In the 1900s, the breed was divided according to the weight category – one, medium, and heavy. In 1914, only dogs weighing up to 5 kg were attributed to miniature, and later the popularity of mini-bull terriers began to decline, and toy bull terriers by that time had already completely disappeared, and the weight limit was raised to 8 kg.

To create a modern type of miniature bull terrier and fix its size, the smallest bull terriers and fox terriers (or Jack Russell terriers) were crossed. The breed type and conformation of miniature dogs were improved by crossing them with standard bull terriers. The first mini-bull club was founded in 1938, and a year later, the breed was recognized in the English Kennel Club.

In the 1900s, Ted Lyon crossed a White Bull Terrier with a Colored Staffordshire, breeding Colored Bull Terriers, around which a lot of controversies flared up. Controversy arose due to the fact that the first colored dogs were deaf, were born blue-eyed, and many feared that crossing white and colored dogs would lead to the loss of important qualities, including a decrease in intelligence. At one time, it was even forbidden for white dogs born of colored parents to participate in club prize shows. But, despite all the twists and turns in 1939, the Canadian Kennel Club recognized the colored bull terriers as an independent breed, and in 1942 the AKC singled out colored dogs as a separate species. At the beginning of the 20th century, they began to actively breed colored bull terriers and they were no longer divided into types.