The Jack Russell Terrier is a recognizable and popular dog breed. This is a pet that you will not be bored with for a minute.

The brave and hardy Jack Russell Terrier Bothy is the only dog that has visited both the North and South Poles. This dog belonged to the famous British traveler Sir Ranulf Faynes and his wife Virginia. Bootie came to them in 1977 – two years before the couple went on a trip around the world. The expedition was supposed to start in the city of Greenwich. Then the travelers, moving along the meridian to the south, were going to cross the Antarctic, then climb “up” and go through the Arctic. 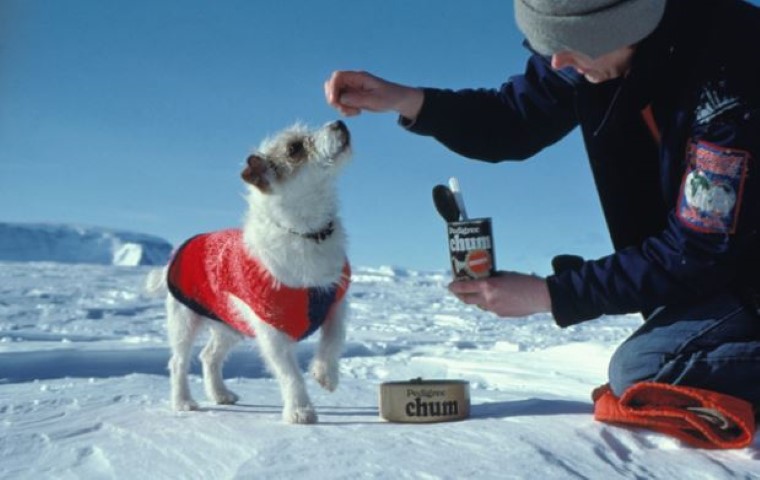 Bothy was unable to take part in the first leg of the expedition, when the group moved through Africa, as the heat and illness posed too much of a threat to his life. But after the expedition went to sea in his own ship, Bothy joined her. During stormy weather, his leash was tied to the deck superstructures.

Then Bothy again regretted and did not take on a land trek in Antarctica. It wasn’t until the explorers reached the Pole that Bothy arrived aboard an airplane. To protect him from the cold, he was wearing a special hat, overalls, and boots.

A few months later, Bothy also visited the North Pole as part of the expedition. It was the high point of the journey, which began in 1979 and ended on August 29, 1982.

No wonder Bothy has become a celebrity. In 1982, in England, he was elected “Pet of the Year”, and the following year made an honorary circle at the opening of “Kraft”, the most prestigious dog show in the world. But even more fortunate for him was that during his adventures he found a girlfriend. Her name was simply Black Dog, she was a cross between a Newfoundland, a husky, and a Labrador and was significantly larger than her fiancé. He met her in the Yukon. Bothy and Black Dog did the rest of the journey together. Since then, they have not parted, except for quarantine several months after arriving in England.

Jack Russell Terriers are excellent fighters against rodents: a representative of the breed named Vampire exterminated a ton of rats in the UK in 1977.

Jack Russell Terrier in the Books

Jack Russell Terrier Milo is the hero of Friends Forever from the collection True Stories of Wonder and Hope about Battersea Shelter in London.

Sparky, a homeless dog of the same breed, helped St. Bernard Beethoven, the hero of the book of the same name, escape from the kidnappers.

His Jack Russell Don James Harriot dedicated the book And Veterinarians Fly and also made his favorite one of the characters in Dog Stories.

Jack Russell Terrier in the Movies

Played by Moose, the brave Jack Russell Terrier, Eddie drove the main character, Kelsey Grammer, mad in the television comedy Fraser for ten years. The four-legged actor passed away at the honorable age of 16 in Los Angeles at the home of trainer Matilda Halberg. As Halberg recalls, “by nature he was a great disgrace.” This doggie’s significant contribution to the show’s success was publicly recognized by Kelsey Grammer in 1994 when he won an Emmy for Best Comedic Performance. The actor then good-naturedly said: “The main thing here is Mus, so the reward is for him.” After playing the old Skip in the film “My Dog Skip” (2000), Moose retired to retirement. But before making a career in show business, Moose, according to Entertainment Weekly, where he was at one time the star on duty, worked as a rescue dog.

Jack Russell Terrier starred in The Mask with Jim Carrey.

Jack Russell Terriers have been “noted” as pets of many celebrities, including Prince Charles, Robert Redford, Mariah Carrie, Kyle McLachlan, Donna Karan, and others.