The question of dog training must be approached with the same responsibility as raising a child. Indeed, not only the image of its owner but also the health and safety of the dog itself depends on how obedient the pet will be. The world knows many breeds, the education of which is considered almost impossible. It’s good that Siberian huskies are not one of them.

Contents hide
1 What Do You Need to Know About the Characteristics of the Breed?
2 How to Raise a Husky
3 Training

What Do You Need to Know About the Characteristics of the Breed? 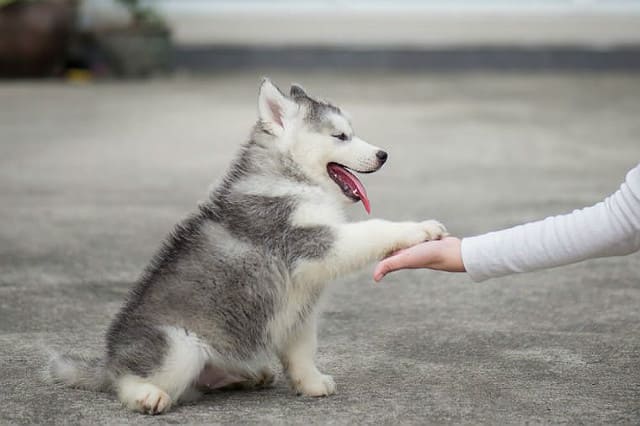 Siberian huskies have long lived side by side with people in the harsh Arctic winters. These dogs helped their owners in hunting, moving, guarding homes, and even nursing small children. This breed is very human-oriented. It can even be said that without the former it is impossible to imagine the existence of the latter.

The husky has a very friendly temperament but is not devoid of stubbornness. Sometimes these pets can be very wayward, and it seems that it will never work to curb their violent temper. It all depends on the owner. If he has patience and is firm in his decisions and confident in his actions, then the pet will be able to feel the authority in him and submit. Otherwise, the husky will quickly take the reins for itself, and in the pair “man-dog” it will be the main one. What is an uncontrollable pet, even if it is so friendly and devoid of aggression, like a husky, is not worth telling.

Only training will help to avoid such problems. It is necessary to start the process as early as possible – from the first minutes of finding a puppy in a new home.

How to Raise a Husky

In the first weeks after the puppy moves to his new owners, they should spend all their energy on establishing contact with him. The puppy needs to be accustomed to his name, show him a place to sleep and eat. Until the dog has been vaccinated, it is taught to go to the toilet to go to the diaper. The main thing that the puppy must understand is that he will have to do everything that people demand of him.

Important! Obedience can be achieved through learning through play and encouragement. You can’t beat the animal, punish it too harshly. For a husky, one displeased glance of the owner is enough for him to understand that he is doing something wrong.

So that in the future there are no problems with raising a pet, permissiveness should not be allowed. If you can’t sleep on the bed, then you shouldn’t even let him get in there for games and the like. All family members, especially children, must be notified of such rules and regulations.

Also, the owners of the representatives of this breed should be aware that the execution of the same commands quickly becomes boring for the husky. To motivate a dog will take a lot of work. If the execution of command causes difficulties for the dog, then the owner should change the method of his behavior, figure out what he can do wrong.

Important! Raising a puppy is much easier than raising an older dog.

At home, it is quite possible to teach a pet basic commands. Such as:

“Come to me”. Mastering this command should be the very first. It is best to start your studies in a relaxed home environment. When a puppy is busy with something, he must be called with the phrase “Come to me!” and pat yourself on the leg. When he comes up, he needs to be praised. After the execution becomes flawless at home, it is worth doing the repetition on the street.

“Heel”. If during a street walk the puppy begins to lag behind the owner or, on the contrary, is ahead of him, it is necessary to pull the leash so that it is near the leg.

“Speak/Bark”. The dog is put next to him on a leash and raised his hand with a treat clutched in it. The puppy is shown a treat and the command is repeated. Unable to jump, the dog will bark. For this, it needs to be praised.

“Sit”. One hand needs to be raised, the other press on the pet’s sacrum. In this case, you need to repeat the command.

“Place”. The puppy is placed on a bed, stroked and the command is repeated. If he wants to leave, he must not be allowed to do this, constantly repeating “Place!”.

“Stop/Don’t do that!”. You can prevent the dog from taking things that are not allowed for it or picking up garbage on the street using the “No” command. To do this, you need to repeat the command and pull the collar or leash.

Important! Huskies are famous lovers of howling and chewing on what does not belong to them. It is necessary to wean from this at the very first cases of such behavior. You need to act gently and not intrusively, but so that the pet understands that the owner is unhappy with him.

When raising a husky, one must not forget about his socialization. After the pet is given the necessary vaccinations, they begin to take it out into the street, acquaint it with strangers and other animals.