The Japanese Chin is a miniature dog with a decorative appearance and a friendly disposition. They appeared centuries ago to entertain noble people. Chin is an exceptional companion who understands human psychology, adjusts to the mood, is ready to accompany its owner always and everywhere. Another name for the breed is the Japanese Spaniel. 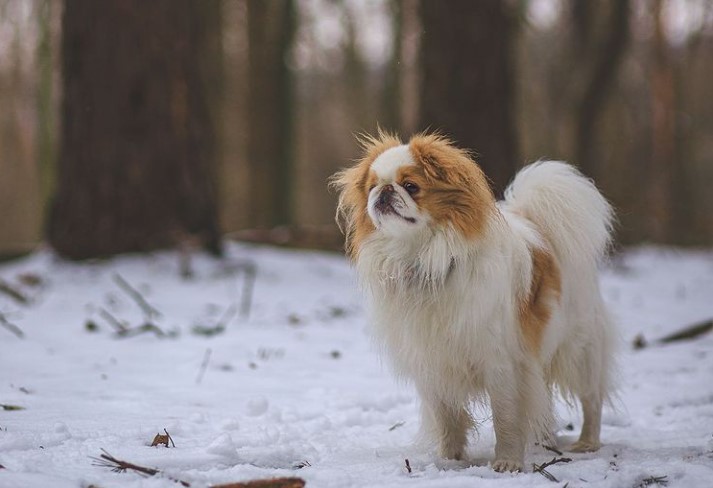 Country of origin – Japan. It is not often necessary to meet the Japanese Chin on the street, and even after seeing this creature, many confuse it with the Pekingese. It is difficult to say with certainty whether they are relatives. The name “Chin” in Japanese is written in two characters and literally translates as “animal” and “the middle between something and something”, whom the Japanese had in mind, remains a mystery.

The Japanese Chin is such an ancient breed that practically no information about its origin has been preserved. It is believed that the Chin, Pug, and Pekingese have a common ancestor – the Tibetan Toy. According to one version, a Tibetan monk brought these dogs to the land of the rising sun, according to another, they were presented to the Japanese emperor by the ruler of Korea.

The first description of the Chin can be attributed to the 12th century. In Japanese culture, these dogs held a special place, they were respected and revered, they were legendary and depicted in works of art. Japanese dogs were loved not only by the imperial family but also by noble families throughout the country.

They really began to breed them from the 14th century. The methods of their selection were then kept in the strictest confidence. The breeders themselves raised the dogs, monitored their health, and handed them over to noble people already. In Japan, they did not impose a ban on the export of local dogs, as it was in China, they were often presented to ambassadors of other countries as a sign of respect. In 1613, Chins first appeared in England, their owner was the wife of Charles II, Catherine of Portugal. Around the same time, dogs from Japan were learned in Spain. This is evidenced by the canvases of artists who could not ignore them. But in the 17th century, they were not destined to spread throughout Europe. Many dogs died on a long journey, while others were affected by a new climate or unusual food. Only in 1860, the world learned about the breed when the Japanese Chin was presented to the English Queen Victoria. They appeared in America a little earlier, in 1854. 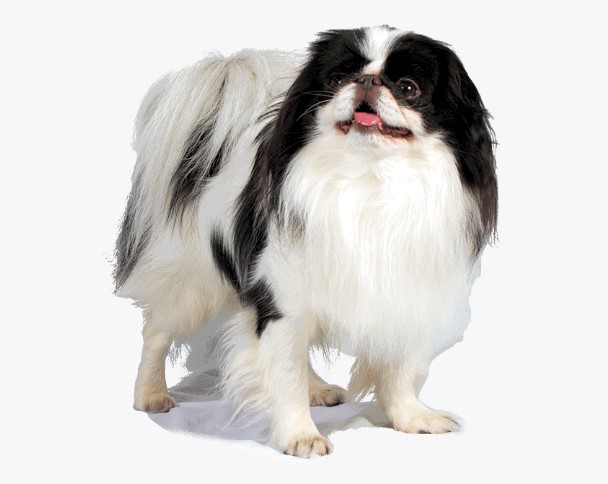 The Japanese Chin is a small dog with large eyes and long thick hair. The constitution is lean, well-muscled, of a square format. Average height – 18-25 cm, weight – 2-4 kg. Males are stronger and more elegant. 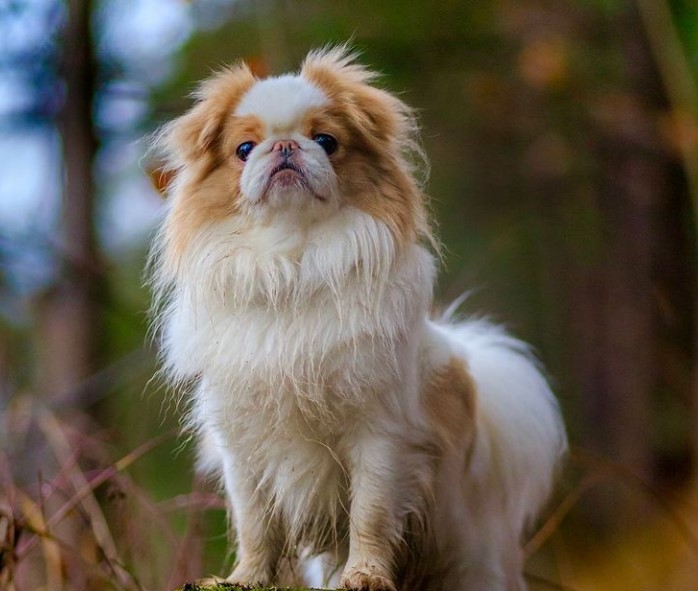 The Japanese Chin is a dog with a balanced, cheerful disposition. True, there are representatives of the breed with a choleric disposition. The psychological comfort of the Japanese Chin depends entirely on the amount of time the owner devotes to it. They are often jealous and touchy. If several dogs live in the house, each of them should have an individual time of communication with the owner. Japanese Chin feels somewhat constrained in unfamiliar surroundings.

Japanese Chins practically do not bark. These are brave and fearless dogs, which will not be frightened by either loud noise or a large animal. They are absolutely not suitable as a toy or companion for children. Proud and independent Chin can only be admired and cared for by a responsible adult owner. Some Chins are characterized by an unstable psyche, due to lack of attention or excessive jealousy, they lose their appetite. If this feature was noticed, they try to prevent this in the future.

They usually get along well with other animals, but rarely experience special affection. Chins will always give preference to a person’s company, rather than the company of dogs, and, as a rule, they are completely indifferent to cats. 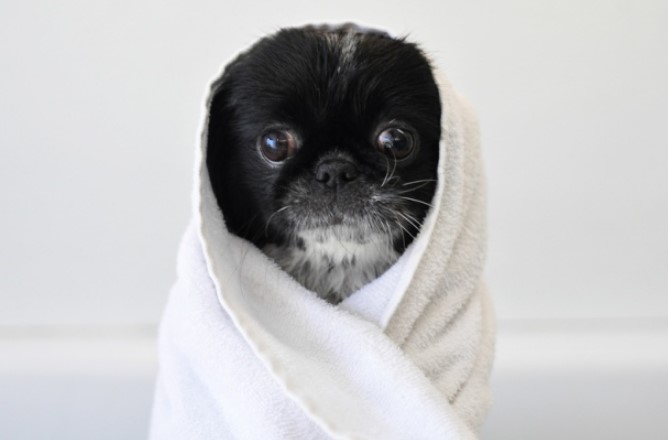 The Chin is fine in apartments of any size, but the dog should have its own resting place, where the bed and toys will be located. When choosing an angle for a dog, it is worth remembering that they often snore in their sleep, and this can cause some discomfort in people with sensitive sleep. Despite the fact that the Chins have a very long beautiful coat, it is not difficult to care for them. These dogs lack undercoats and their straight, silky hair is not prone to tangling. In order for the coat to lay beautifully, and the dog to look well-groomed, it is regularly brushed, a little more often combing will be required during the shedding period. If the pet is not exhibited, they sometimes do a short haircut for the summer.

At least once a week, Japanese Chin should rinse their eyes and brush their teeth. The ears are checked periodically for signs of infection. Bathe as needed, sometimes dry shampoo can be used. After water procedures, the dog’s coat must be well dried with a hairdryer – cool air. Claws are cut every two weeks. The hair is clipped between the pads when it becomes too long. 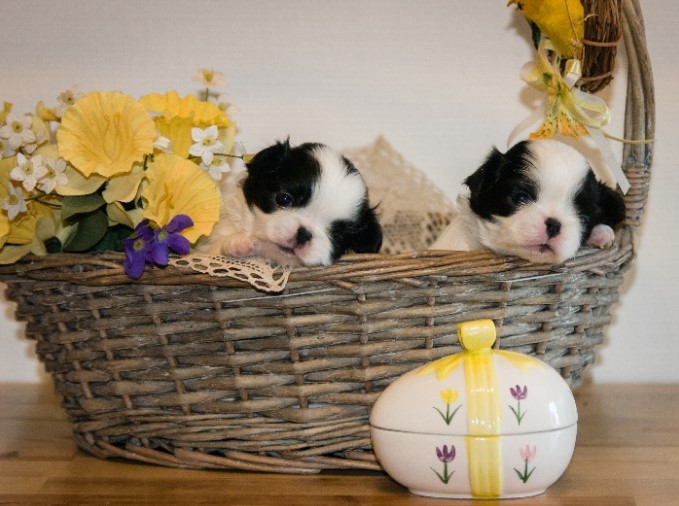 Food for Japanese Chin should be high in calories. These dogs eat little and move a lot, even in the apartment. The diet should be high in protein and calcium, the pet should receive fresh fruits and vegetables every day. If the owners decide to feed with ready-made food, it must meet the requirements of this particular breed and be at least premium.

Chin’s full age lasts up to 8 years. After that, dogs begin to age, possibly exacerbating some chronic diseases or the manifestation of diseases that are characteristic of an elderly body. After 7-8 years, they begin to lose their teeth. From the age of 10, vision and hearing deteriorate. The dog needs special care and attention. If your pet is a Japanese Chin, diseases of a different nature will periodically make themselves felt. The main thing is not to panic, but when the first signs of any disease appear, take the animal to a veterinarian for an examination. Chin is most prone to:

Also, these dogs are susceptible to the development of anomalies resulting from improper care or irresponsible attitude towards them on the part of the owner. Unfortunately, dogs are often susceptible to infection with dangerous infectious diseases.

The most common in them is the so-called “dog plague”, which animals can pick up at any age. This is perhaps the most dangerous and contagious disease, the treatment of which has not yet been developed. Only a set of procedures is prescribed to neutralize the virus, which does not at all guarantee the complete recovery of the pet. It is recommended to observe preventive measures of infection from puppyhood: the main thing is to deliver the plague vaccine on time. This measure saves many animals from death every year.

With proper care and feeding, the Japanese Chin can live quite a long time – 18-19 years. The average life expectancy is 15-16 years.