This species appeared as a result of crossing smooth-haired dachshunds with spaniels and with some breeds of small cops, with breeds of hunting dogs with long hair.

Long-haired dachshunds were first mentioned in 1820. There is an opinion that it is distinguished by a calmer character, aristocracy. Long hair is most commonly seen in dwarf and rabbit dachshunds. 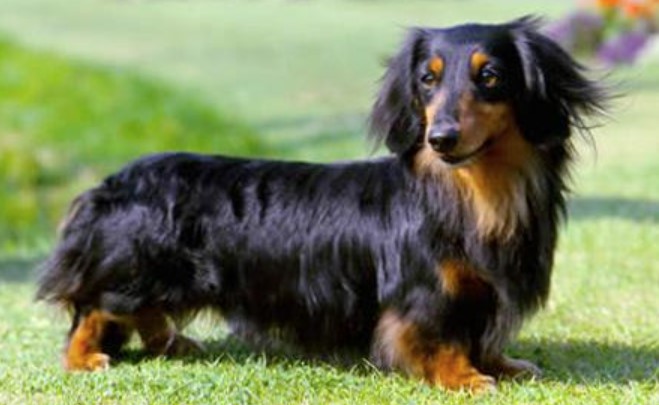 All characteristics regarding constitution, size, color, meet the requirements described in the breed standard. The only difference is the long coat, which is a breed characteristic of the species.

The hair is soft and silky, elongated on the lower part of the body and neck. In long-haired dachshunds, the coat is straight but may be slightly wavy. Longest hair on the ears and lower part of the tail. On the front legs, the hair forms a feathering – a long fringe, and on the hind legs – trousers. At the same time, the fringe and feathering are almost the same color.

The length of the coat is established in the third year of life, after several molts. It grows slowly, while in males it is longer and thicker than in females. The outer coat is 5 cm long and has a thick undercoat.

The color of the coat is red, brown, black, and tan or marble – the main color is dark with possible spots of gray or beige.

Long-haired dachshunds are increasingly bred for decorative purposes because dogs are distinguished by their beauty, pretty appearance, and noticeable intelligence. Dogs of this type are suitable for keeping in an apartment, get along well with children, and are excellent companions. Although initially this species was bred for hunting. However, long hair prevents the dog from hunting, in addition, ticks and thorns often cling to it. In rainy and snowy weather, dirt and snow adhere to the coat. The pellets formed on the lower part of the body and on the back of the paws impede the movement of the dog.

Care for long hair is reduced to brushing with brushes with frequent and sparse teeth. Strong dirt is washed off in the shower without using soap or shampoo.