Terriers are one of the most numerous groups that combine dog breeds (more than 30), which were specially bred for burrowing and rodent extermination. One of the brightest representatives of the group of rat-catchers and fox hunters is the Jack Russell Terrier.

Talented hunters, loyal friends, and tireless mischievous Jack Russell Terriers are divided among themselves into several grounds. The main classifier is the type and color of the dog’s coat.

Smooth-haired Jack Russell Terriers are considered the most common of all varieties. They have a soft and pleasant-to-the-touch coat, which is quite tight around the body of the dog. The colors correspond to the standard – brown or red spots on a white canvas.

The main problem with smooth-haired Jack Russells is the long seasonal molt. If the dog lives in an apartment, it can drag on until a year-round process. For the care of the coat, it is recommended to use a special furminator. Hygienic procedures are carried out no more than 1-2 times every 4 weeks.

The long-haired Jack Russell Terrier is easily recognizable by its long beard and bushy eyebrows. Dogs of this species are very cute and funny to look at. Their coat is longer and stiffer, which is why it bulges a little in different directions.

Long-haired Russell sheds not so often and abundantly. The main disadvantage of this breed is the need for regular trimming, without which the dog itself will not be able to get rid of dead hairs. It is necessary to accustom your pet to such a long-term care procedure from childhood, otherwise, it will feel pain in the process. An adult Jack Russell is plucked once every 3 months. 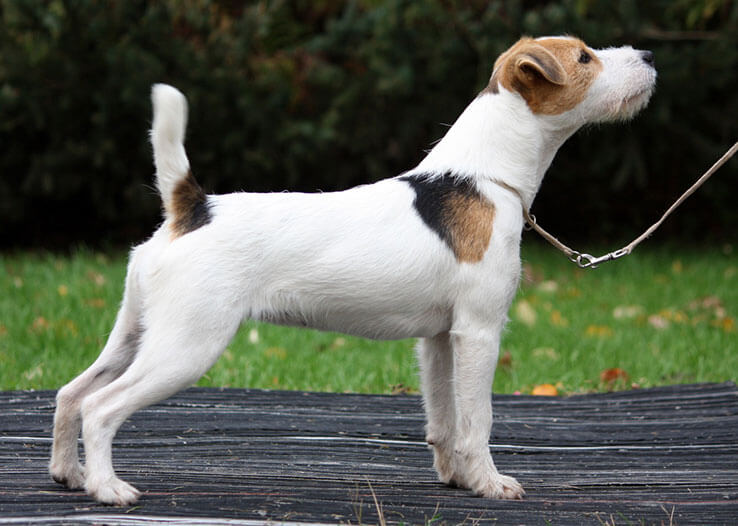 Broken Haired Jack Russell Terriers are very similar in appearance to long-haired terriers, however, the length of the guard hair is slightly shorter. Like smooth-haired terriers, it does not stick out but is pressed against the body. Each hair of a Broken Jack Russell Terrier has a break. Brokens do not have eyebrows and beards. Just like the Wirehaired Terrier, the Broken needs trimming.

Jack Russell Terrier Broken Light lacks a beard and eyebrows. Their coat is kinked but not as numerous as that of the Rough Coated Terrier. The coat is practically smooth, with the exception of a few bulging areas. Caring for them is the same as for a standard group. Trimming may sometimes be required.

According to the color of the coat, Russell Terriers are divided into white with red and white, and black. The number of spots should not exceed 30% of the entire body.

Sometimes they try to divide Jack Russells by height, selling too long-legged puppies under the guise of the same breed, or, on the contrary, miniature puppies. The buyer should take into account that small terriers are most likely the owners of genetic diseases and will bring more trouble than joy. Too tall terriers in most cases are representatives of a separate breed: Parson Russell Terriers.